What is a 4 Wire Smoke Detector? 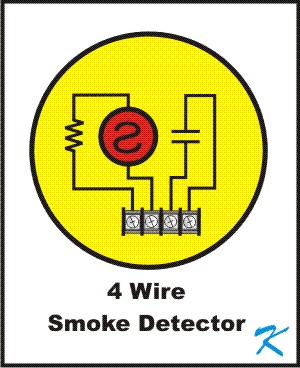 The only purpose of this internal protection resistor is to limit the amount of current that the detector can use from the wires providing power to the detector. In essence, it keeps the detector from burning up.

But by protecting the smoke detector, the internal resistor does make it different from just a regular conventional smoke detector; the detector cannot short out the Class A or B zone wires properly and can't directly send an alarm signal to the Fire Alarm Control Panel (FACP).

Instead, it's the internal relay contacts of the smoke detector that send the alarm.

The alarm relay contacts of the 4 wire smoke detector are connected to the Class B or Class A zone wiring of the fire alarm system. When alarmed, just like a conventional heat detector, pull station, or waterflow switch, the relay contacts short out the zone wires.

The zone wires, of course, are a standard conventional Class A or B wiring system complete with the Class A or B method of supervision of the wires, and no t-taps.

Instead of connecting the normal detector power wires to the conventional Class A or B zone wires of the fire alarm system, the detector input wires are connected to a resettable 24 volt power source.

The detector power, through the internal resistor, has to be interruptible because this is how the detector is reset --- after the detector has gone into alarm, during the reset process, the 24 volt power to the detector is momentarily turned off and then on again. The detector then starts over and powers up normal.

The wiring for this 24 volt smoke power is similar to Class B zone wiring in that it is daisy-chained from detector to detector, doesn't have any t-taps, and using an end-of-line device like a relay or power monitor the wires themselves are supervised.

If a wire is broken, in order to send a trouble back to the FACP, the relay or power monitor loses its 24 volt power and then opens the wiring to the end-of-line resistor on the conventional Class B fire alarm zone.

Opening up the wire to the end-of-line resistor causes the panel to show trouble on the zone.