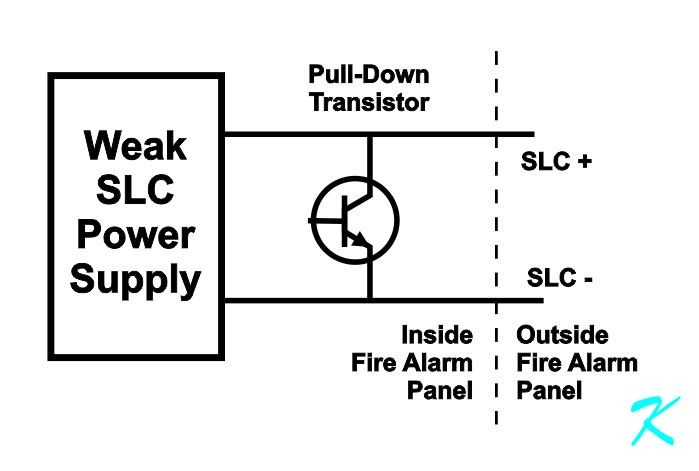 Why did the 24 Volts on the SLC Short Out the Panel?

We encountered a weird problem for the build where one of the smoke detectors was installed while the 24 volts is on. During the installation, somehow some part of the circuit got shorted and burned out the fire alarm panel. The vendor didn't provide us reasonable explanation of the root cause, and I always think there should be a short breaker or a diode in the panel to preventing this kind of problem.

A wrong installation of one smoke detector destroyed the whole fire alarm panel seems unreasonable to me. Could you please help me understand the real root cause, from technical side?

Yes, I've seen this exact problem before. This mistake isn't made very often, but it can happen.

When the technician connected the 24 volts to the Signaling Line Circuit, the 24 volts promptly burned out the fire alarm panel.

Two Power Supplies - One Strong and One Weak

The 24-volt auxiliary power supply in the fire alarm panel is strong. It can provide one to three amps of current at all times. This supply commonly provides power to operate relays, sounders, and other "high current" devices inside the panel and throughout the building. If there is a sounder base on the smoke detector, this is how the sounder itself gets its power.

The Signaling Line Circuit has only two wires. In order to send signals on the Signaling Line Circuit, the panel has to send the equivalent of Morse Code on the same two wires that are providing power. Inside the panel is a shorting transistor. This transistor shorts out the power supply for very short time intervals, and does this rapidly to make "digital words" in the form of computer style data.

It's this shorting transistor that was burned out by connecting a very strong power supply to the Signaling Line Circuit.

What About Fusing the Circuit?

Fuses work by heating up a wire so it melts and falls away. This melting and falling away takes time. During this time, the transistor, being very small, also would melt from all that current before the fuse wire finally gets around to falling away.

Protecting the shorting transistor from the HUGE current that can be provided by the auxiliary power supply just isn't practical using a simple fuse.

This is a really quick, detailed and easy to understand response. I appreciate your help!

I do have a few other questions and make me thinking would it be a different root cause. Unfortunately, I don't have the panel with me and cannot tell if it's really the transistor is burring out.

However, the panel printed on the display and should be able to tell which smoke detector in a specific zone is shorted. It seems like the SLC is properly connected to the smoke detector so that the panel can query which detector is shorted. And the installation technician is pretty confident that he only shorted the AUX+ (power) and AUX- (group) for a very small period of time. He disconnected the 24 volts right away once he noticed it touched.

By the way, would such incident (connecting 24volts to SLC) destroy the rest of Smoke Detectors connected along the line?

Quick Short of 24-Volts onto the SLC

Yes, I, too, have connected wires creating a short. Many times, I, or people I worked with, only had a single spark to indicate a wire brushed against something it shouldn't have. . . but that was enough. Lots of damage can happen with even a quick short on an electronic circuit.

Always keep in mind that all electronics are fragile. Even a short that's a thousandth of a second long can easily punch a small hole through a silicone junction, like the two junctions that can be found in every PNP or NPN transistor. There are many times that a brief spark has required many hours of troubleshooting to repair.

I've troubleshot electronic circuits for over half a century now. During almost all of that time, in order to really determine if a transistor is good, the transistor has to be removed from the circuit and tested without the other parts of the circuit interfering with the test. With the miniature components and wiring on the printed circuit board, only the manufacturer has the equipment to safely remove and replace the transistor.

The best you can do is try a different printed circuit board. If the new one works, but the old one doesn't work, then use the new board.

Before connecting the SLC to the new panel, though, use both an AC and a DC meter on the wires of the SLC. Make absolutely certain that the SLC won't also burn out the new panel. If I was troubleshooting, I'd do that to give me confidence.

All addressable devices, all smoke detectors, all heat detectors, all input modules, all supervised output modules, and all control relay modules have this pull-down transistor. When the devices like smoke detectors or modules send signals back to the panel, they don't continuously short out the circuit like a conventional pull station, they rapidly short out and un-short out the SLC creating digital information. They provide short bursts of computer style words so other devices and the panel can also use the SLC to send signals.

It's during those short bursts of rapid shorting of the SLC that the transistors can burn out from the 24-volt power supply. During the brief time that the 24 volts was connected, though, it could easily have shorted out one, some, or all of the pull-down transistors in the addressable devices.

I've never been able to properly use an ohmmeter to determine if an addressable detector is bad. There's just too much circuitry involved inside the addressable device to use the meter.

Especially with EST's SLC, even one pull-down transistor that failed as a short will keep the SLC from working at all. The SLC will show a steady zero volts.

Normally, the SLC provides as a very unsteady reading that jumps around anywhere from 11 volts to 20 volts on the voltmeter. When making measurements on the panel, though, whether or not there're any wires in the terminals, the screws have to be tight. Loose screws on the terminals give false low readings when connecting the voltmeter probes.

If the SLC seems to be shorted, try this. When the panel is programmed and working, and without any wires on the terminals of the SLC in the panel, the measured voltages should be that unsteady 11 to 20 volts. If the voltage drops to zero when the SLC is connected, the panel thinks there's a short.

Wait for the Voltage to Return

Often times, when the panel has detected a "short" on the SLC, the panel won't even try to electronically connect the SLC for the next :30 seconds to a minute. Just wait for it, the panel will try again soon.