Why Won't the Strobes Work? 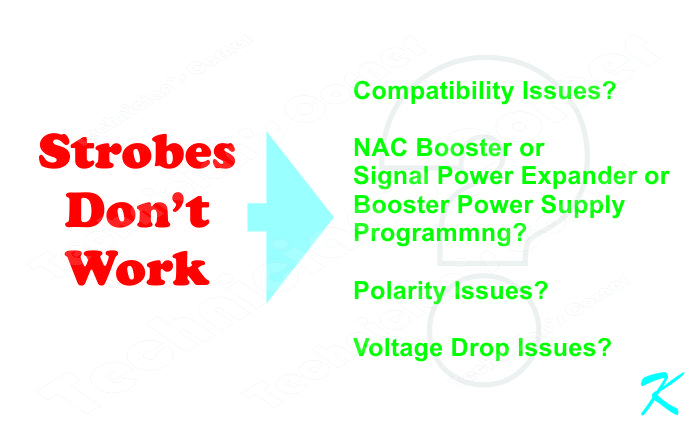 I have a Silent Knight 5208 fire alarm control panel. When there's an alarm, all the horns sound off, but none of the strobes flash.

Can you help me or give me suggestions on how to fix this? I've never run into this problem before.

I would like to have at least some ideas of what to look for.

There are several possible causes for the problems.

The requirement that all strobes in an area flash at the same time requires that the manufacturers all come up with a method of synchronizing the strobes. This synchronization is to prevent epileptic seizures from stopping some people from escaping fires.

Many times, however, a manufacturer will allow their equipment to be used with several types of synchronization, so long as the installer of a fire alarm system is consistent; all of the horns and strobes are using the same synchronization system.

Many times when someone else had replaced a horn or strobe, I have had to reverse the wires to get the strobe to work.

This probably isn't an issue, but if the wire is too small, if the wire is too long, if there are too many devices on the circuit, some of the devices won't work. The Signal Power Expander or Booster Power Supply won't show a problem because that is not measured by the NAC Circuit Output on the control panel or the power supply.

To check, go to the last device, where the end of line resistor is located, and measure the voltage while the system is in alarm. The voltage should be at least 23 volts. If the voltage is lower than that, something needs to be changed.

Yes, I know. The datasheet on the strobes show that they are good down to 16 volts. The strobes, though, have to work even after 24 hours of electrical blackout. The batteries at this time are down to 20 volts, which gives you about 4 volts to lose (voltage drop) in the wire of the circuit in the building. A properly engineered system will take that into account.