What is the Difference in Power Supplies? 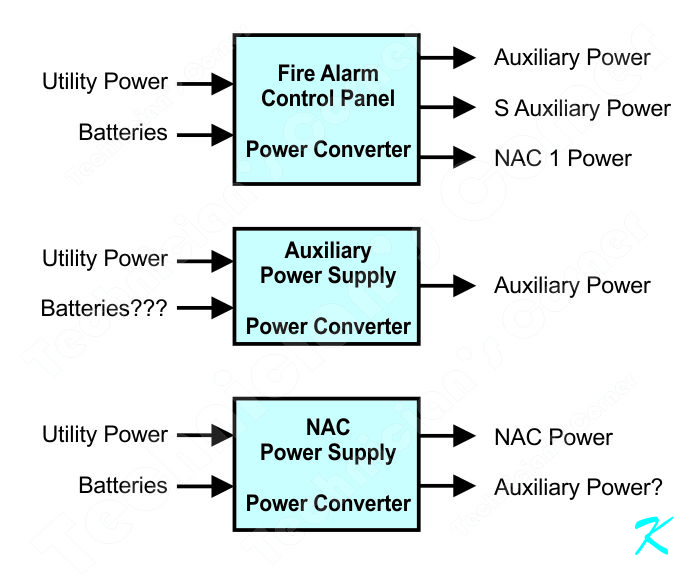 Yes, in fire alarm systems there are batteries, but the batteries get their stored power from chemical reactions in order to produce their 12 volts or 24 volts power. In other words, as an alternative power source, the batteries give their previously stored power to the Fire Alarm Control Panel, the Auxiliary Power Supply, or the NAC Power Supply.

Read the manual to find out what current can be used from the power supply.

Read the manual to find out all power supply limitations and capabilities.

A Fire Alarm System Auxiliary Power Supply is a power converter that uses utility power as its primary power source, and uses backup batteries as its alternative power source. A Fire Rated power supply has been tested by a "Third Party", Nationally Known, Testing Laboratory like UL, CE, ULC, FM, etc. The laboratory has the power supply listed, and there is a label on the power supply that says it is tested and listed.

In addition, because it's designed to be used in a Life-Safety fire alarm system, it self-monitors. It has a means of telling the fire alarm control panel that something is wrong. Things like a shorted output, loss of voltage on its output, weak batteries, or other internal problems send the signal.

Usually, the internal troubles will cause a "trouble relay" to send the trouble signal back to the fire alarm control panel.

How much current can be used is shown in the manual that comes with the power supply.

A Non-Fire Rated Auxiliary Power Supply is a power converter that uses utility power as its primary power source. Sometimes it has the capability of charging and using backup batteries as its alternative power source. The batteries, however, are almost never monitored, so don't count on the batteries for life safety purposes.

Usually, there are no trouble relays so if there are internal troubles, or even outright failures, no one will know until something else in the building fails due to lack of power.

How much current can be used is shown in the manual that comes with the power supply . . . Except that the current rating for a non-fire rated power supply was only tested under ideal laboratory conditions. "Ideal Laboratory Conditions" are not reasonable measurements for something that is going to be used for life safety.

Unlike a Fire Rated Power Supply, the greatest current level that can be used is half of what it's rated for; it gets too hot inside the box if the rated current is used continuously. Under continuous current use, and especially in poorly ventilated areas, the real allowable current from a non-fire rated power supply is, at best, only half of what the power supply is rated for.

The acronym NAC stands for Notification Appliance Circuit. The NAC is the wiring or circuit in the building that carries the needed power to the horns, strobes, chimes, speakers, etc. that warn people of fire. The power supply outputs to connect to the building's NAC circuit are usually labeled as NAC 1, NAC 2, NAC . . .

The Plus is that the NAC power supply is normally supervising the wires on anywhere from two to four horn / strobe circuits. On command, the power supply switches from the wire supervision (checking continuity) of the circuits to providing 12 volts or 24 volts alarm power to the horns / strobes attached to the NAC circuits.

To make things interesting, normally the voltage polarity for the wire supervision (continuity checking) is backwards so the horns and strobes don't turn on. When the power supply is switched from wire supervision to providing the 12 volts or 24 volts power, the voltage polarity on the wires is switched to forward so the horns and strobes can use this power to turn on.

If the supervision circuitry finds something wrong, it will also activate the trouble relay.

How much current can be used is shown in the manual that comes with the power supply.

The manuals are there for you, the installer and technician. Read the manual.