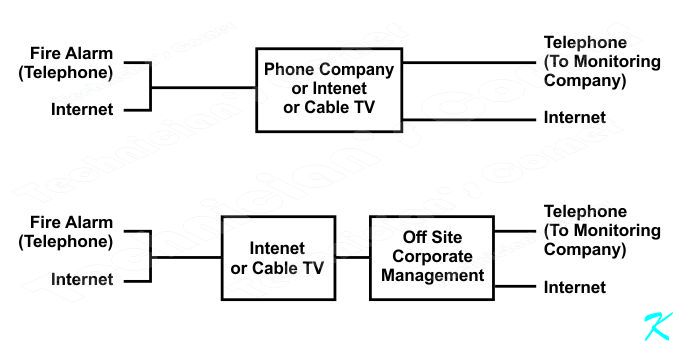 I came across your website after responding to a fire alarm at one of our buildings this morning - Yay, no sleep!

I thought you can help me with this specific panel or provide some direction:

Every month between the last day of the current month and the 5th of the next month I receive phone line failures on my fire panel. It's clockwork. The troubles resolve shortly after the 5th of each month. The phone service goes "in and out" and the phone company can never find the problem and the fire panel technician can never find a problem. Of course, I am the one losing the sleep so they are not too concerned to help. Thoughts? Ideas, what am I missing here?

Same panel, and we are renovating the building. The GCs electrician is telling me I need a new fire panel but when I ask him why, he has no real reason. How do you know it is time for a new panel? He is trying to sell me a $18K unit with cellular connection. Will a new panel resolve my middle of the night phone line failure issues?

I look forward to hearing from you. Thanks for your help!

For your first question, what you're dealing with is "scheduled maintenance". This is down-time that large companies that have 24-7 service use for updates and other repairs to their service. Often, they won't tell anyone they're shutting down for a short while, and usually they will schedule this routine down-time for early morning on a weekend, when there are fewest people needing service.

I'm guessing here, but you're dealing with two different services, telephone and internet, on what looks like a single service: telephone service combined on-site with internet service. The same wires or fiber optics are leaving the building, but carrying two different signals on the single communication line.

The two services may be leaving the building on a single communication line, but somewhere outside, the telephone service and the internet service are split apart. The signal dividing can be at the nearest neighborhood control box, or the splitting can be at the internet or telephone central office. I've even seen where the signals both go to the management company's corporate office in another State before the dual signal is split up.

Your problem is that during this routine maintenance time, your fire alarm system will not call the fire department.

I don't know how old the fire alarm system is in the building. There are also a number of other factors involved with whether or not the fire alarm system needs to be replaced, including what the fire department has to say. It could be that if the GC electrician is used to installing and servicing cellular systems, that may be a way to go.

With fire alarm systems, service after sale is almost more important than the type of system used. One way of figuring out if the GC electrical company is installing a reliable system is to make sure they will be the ones servicing the system for many years to come. If they just install a system, and then walk away after a year, they aren't standing behind what they install; if they install a system, and then service it on a continual basis, the are standing behind what they install.

Also, talk to property managers in the area who are using the proposed system, and talk to the maintenance people or caretakers. Both types of people have to deal with the fire alarm system in different ways. You need to be reassured from the management point of view and from the maintenance point of view that the proposed system is going to be a reliable system. (Reliable, in this case, means you won't be regularly called at random times because the system, including the central monitoring station communications, has intermittent troubles).

Thanks Doug, this makes complete since, I was thinking more along the lines of billing periods. But yes, scheduled maintenance of the system, since it typically occurs afterhours and on the weekends, is more rational.

I appreciate your straightforward explanation of this and other topics.