What do they mean as Pathway on the Record of Completion?

The pathway is mostly about what the fire alarm system does when something goes wrong with the wiring, the fiber optics, the wireless communication system. Will the fire alarm control panel show a trouble and still communicate with the devices with an open circuit, short circuit, ground fault, etc. 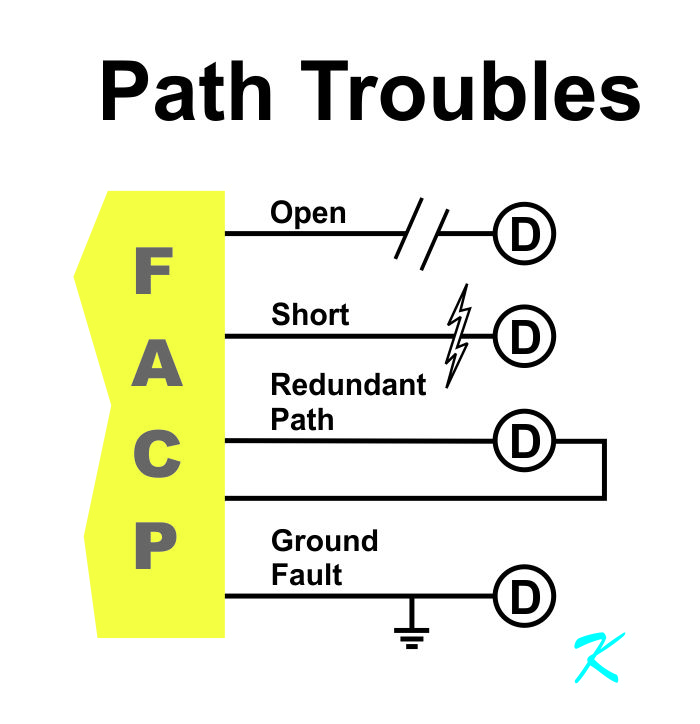 I have a question about the fire alarm system.

In the record of completion, should we indicate that the pathway used is SLC, IDC, and NAC?

There seems to be no definition provided by NFPA 72, so does a separate pathway mean something like 4-wire smoke detectors?

Thank you, N A

The National Fire Protection Association (NFPA) has changed their definitions for pathways little in the NFPA 72.

In the past, the NFPA used Class A and Class B wiring for both the Initiating Device Circuit (IDC) and also for the Notification Appliance Circuit (NAC). Then they added a whole bunch of Style numbers and letters for the variations on Class A and Class B. Then they tried fitting in fiber optics, wireless systems, RS485 wiring methods, RS232 wiring methods, etc. into the Style numbers and letters. This type of classification and style systems for the all the forms of communication got very cumbersome.

They have now boiled down all the different Styles and Classes of the various signal pathways to a total of seven classifications. These classifications don't really show how to wire anything, these classes show how the building wide fire alarm system is going to work when something goes wrong with the alarm's communication routes. The pathways are now classified as Class A, Class B, Class C, Class D, Class E, Class N, and Class X.

When they ask about the pathway, they are looking for is the classification of the pathway being used for the fire alarm system. They want you to write down how well the pathway is supervised, and if there's a problem with the circuit, whether there's a redundant path to make sure signals still get through.

What you need to put down as a pathway is the classification of the pathway.

The following is a summary of the classifications for the various pathways that is now used by the NFPA.


This is annoyance supervision - people get annoyed when things don't work right and they want the system fixed.

Example of a device going into fire mode when a wire breaks or a signal is lost:

This is basically local Ethernet, Token Ring, or another network or IP infrastructure.

In other words, with a second ground fault, the building ground system becomes an unwanted, interfering pathway that prevents the system from working properly.

However, because wireless systems, fiber optic systems, and some data systems (like Ethernet) don't pass shorts caused by ground faults to the panel or other devices, a ground fault indication is not always needed.