Is it Permissible to Connect Addressable Devices in a Class A System? 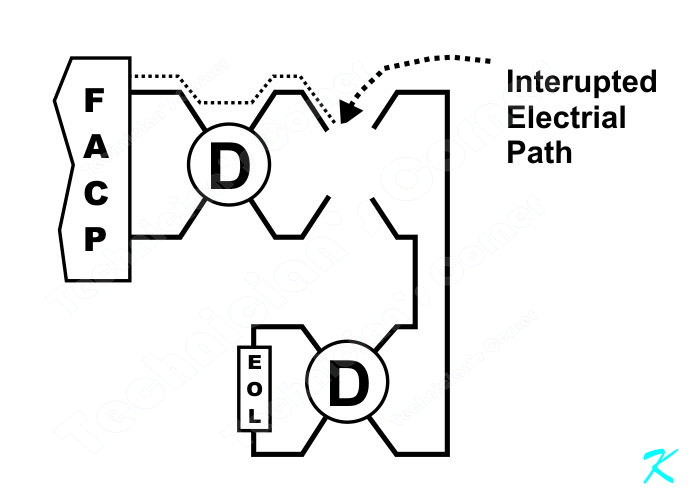 I have a couple of questions.

1. Is addressable (connected in Class A) NAC permissible in NFPA?

2. What is allowable time in NFPA to get the trouble signal if you remove a NAC device?

1. Is addressable (connected in Class A) NAC permissible in NFPA?

Yes, the NFPA (National Fire Protection Association) does allow for addressable horns, strobes, and speakers, but there's more to the question.

Notification Appliance Circuits (NAC) whether they're Class A or Class B have to be consistent. All of the horns, strobes, and any speakers on the circuit have to be of the same manufacturer, and work with each other in the circuit; they have to be compatible with each other. If they are of different types, some of the horns or strobes won't sound off at the proper rate, and possibly won't work at all. Some of the speakers will be either too loud or too quiet.

All of the horns, strobes, and speakers have to be compatible with (work with) the fire alarm system manufacturer, or the circuit and devices won't work right.

2. What is allowable time in NFPA to get the trouble signal if you remove a NAC device?

To work on a fire alarm system, though, there will be trouble; that's what "working on the system" does. When you are on site and working on the system, the assumption is that you, personally, are also watching for fires. You are required, personally, to have awareness of the possibility of fire, and should have a plan in the back of your mind of what to do in case of fire.

If you remove a horn or strobe from the circuit, be aware that some or all of the horns or strobes on the circuit won's work (that's what trouble with the NAC circuit means). Make sure that occupants of the building can be warned of a fire before you leave.

The local fire marshal might have further ideas about the trouble signal.

By trouble signal, I mean that if I remove any detector, what is the allowable time to get the signal at the panel?

I have not found a reference in the NFPA Code to how much time "allowable" to get a trouble signal at the panel if a detector is removed.

The NFPA Code requirements are based on good fire detection practices, and on what, physically, any fire alarm system is capable of doing.

There might be a code somewhere that says what time is an acceptable time to show a trouble on the panel, but from what I've seen, all conventional fire alarm systems (non-addressable) show a trouble in less than a second after the wiring is disconnected.

If the teacher asks "Detector 27, are you here?", and detector 27 doesn't answer, the teacher marks "absent" - the panel shows a trouble signal.

The NFPA Code says that the fire panel has to take attendance, or poll each detector, once every 20 seconds. In essence, if an addressable detector is removed, then according to the NFPA, a trouble signal will be shown on the panel in 20 seconds or less.