What do We Include in Battery Calculations? 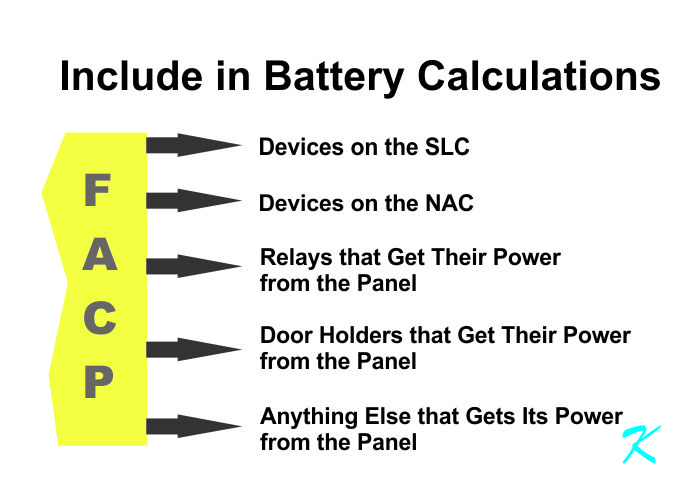 Thank you, R B

When deciding what to include in the battery calculations, we look at the reasons for making these calculations in the first place. A fire alarm system is a life safety system; if the system doesn't work, people can get hurt - or worse. The times that the fire alarm system is supposed to work are "Always", including the time during a power outage.

The battery calculations are for you, the designer, the installer, or the technician. They show you that the system will still work even if there's a power blackout. The calculations are also for the fire marshal, UL, the insurance representative, and even the building owner; the calculations show them that you took the effort to make sure the system works during a power outage.

That's where we come up with the 24 hours.

Anything that drains the batteries during that 24 hours has to be considered because otherwise, the life of the batteries is shorter than 24 hours.

Then we get to the alarm time.

That's where we come up with the five minutes of alarm time.

Two Hours or 15 Minutes - During the power outage, fire alarm systems that use audio messages (which may say other things like get to a safe place inside the building), or can take longer than five minutes to evacuate the building, have to be active during the alarm for two hours.

The NFPA is reasonable on this, also. Because they consider that the alarms will only be sounding intermittently during the two hours of alarm, they say that the batteries have to keep the whole building sounding in full alarm for only 15 minutes.

That's where we come up with 15 minutes during the two hours of alarm.

What it boils down to is if something is able to get its power to operate off the batteries, that device has to be included in the calculations.

It doesn't matter if it's an "Addressable System" or a "Conventional System", the calculations are for a life safety fire alarm system.