Can the Fire Alarm Zones be for Multiple Floors? 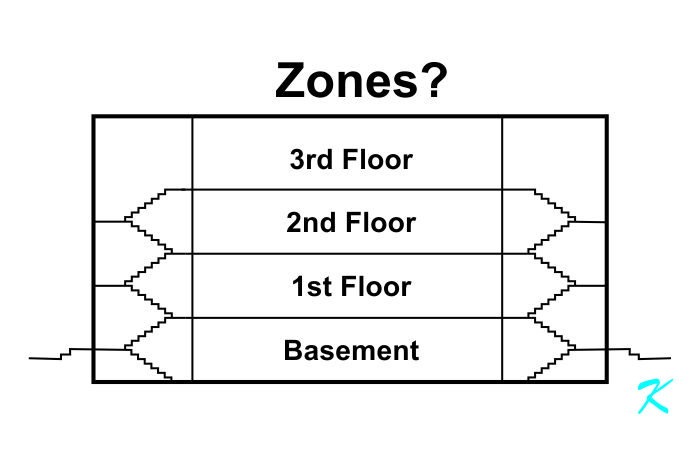 Thank you for all the posting on your knowledge on Fire Alarm Systems.

If I'm installing a fire alarm system in a 3 story plus basement building, can I apply a single zone for the entire building? Each floor of the building is only around 4000 square feet (around 371 square meters).

Or, if the zones are not allowed to cross floors, does this make 4 zones?

Thank you, A R

A zone on a fire alarm panel display is shown either with labeled lights (like "Basement", "1st Floor", "2nd Floor", "3rd Floor", Etc.) or with words on a graphic display.
If the fire alarm system is an addressable system that uses words on the display, all the devices are shown as separate devices, each device is actually its own zone.

Examples:
Remember, the fire alarm panel is only read by people during an emergency. Avoid acronyms like RTU (RTU stands for Roof Top Unit) and AFA (AFA stands for Automatic Fire Alarm - whatever that means for this installation). The people reading the display during an emergency, like a volunteer firefighter or building owner, are not trained in fire alarm abbreviations. These people are paying attention to what is going on and can't go looking up definitions.

Because the AHJ (Authority Having Jurisdiction) is the person having final say over the fire alarm system, the AHJ should also be consulted. Most fire marshals and other AHJs are glad when they are asked ahead of time about things like this. Before talking to the fire marshal, just make sure you know what kind of fire alarm system you have (Addressable or Conventional) and if the panel is conventional, how big the panels is (how many input zones it has).

Thank you for your quick response.

So. A zone should be designed around the idea of providing instant information for the most important people like firefighters, owners and technician and not determined by number of floors.

Thank you very much for the insight.

Remember, though, that fire alarm installers like you and I aren't the ones to determine fire control zoning. Fire control zones are something that the responsible person, the one most concerned with fire-fighting and fire-safety (the fire marshal) decides.

Other factors in even a simple fire alarm system add more complication.