How is the Sensitivity of a Smoke Detector Determined? 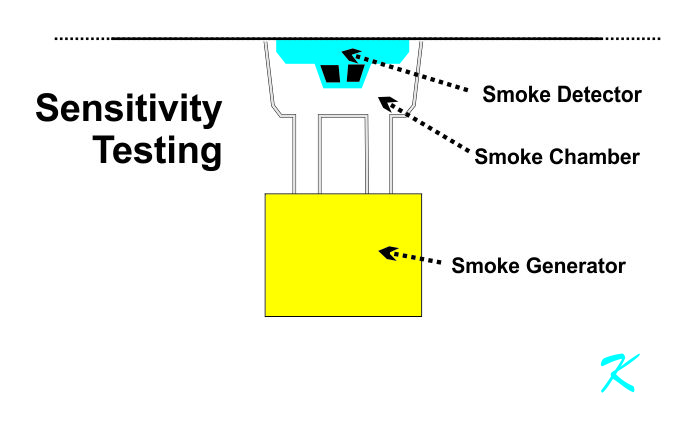 How do you determine or test the sensitivity of a detector?

Thank you, B L

The sensitivity of a smoke detector is determined using a tool that has a cloud chamber. The tool has a calibrated measurement system to show the amount of smoke is needed to set the detector into alarm.

There are four types of testing for smoke detectors:

Making sure the detector is properly connected to the fire alarm control panel, and making sure the detector and the control panel are programmed correctly, magnet testing is used during construction and installation. However, to show whether a smoke detector detects smoke, only artificial smoke from a can (which is particles in the air) or real smoke (which is particles in the air) is used.

To show if a smoke detector will detect smoke, function testing uses artificial smoke from a can. To find out how to use the canned smoke, read the instructions on the can.

To determine how much smoke it takes to set a smoke detector into alarm, sensitivity testing uses a calibrated, portable cloud chamber. It uses a photo-reader, kind of like the smoke sensing chamber inside a photo smoke detector, to sense the amount of smoke in the cloud chamber.

The cloud chamber, or testing tool, completely encloses the smoke detector and starts out with clean air. For the measurement, artificial calibrated smoke is slowly introduced into the chamber.

Because the sensor has been reading the amount of smoke inside the cloud chamber all along, the smoke sensor can say the equivalent of "It takes this much smoke to set the smoke detector into alarm".

To automatically adjust their sensitivity to a pre-set standard, many addressable fire alarm systems adjust a smoke detector's sensitivity downward as dust buildup sticks to the inside of the detector's smoke chamber.

Photo smoke detectors use a reflective principle to detect smoke. Inside the smoke sensing chamber, a light beam is projected by an LED onto the black wall of the chamber. The chamber is constructed so a photo-pickup transistor cannot detect this light beam.

In essence, the sensitivity for all the smoke detectors on the system can be printed out for the record.

Also, these measurements take time. Be prepared to spend at least four or 5 minutes on each detector to obtain the sensitivity.

If you are required to test sensitivity on the smoke detectors, you are going to have to keep accurate records on each smoke detector in the building. You will have to show, in writing, the results of testing each smoke detector at the time it is installed, after it's been in use a year, and something like every five years after that.

Just make sure to show accurate records for each smoke detector because, if for no other reason, the AHJ (Authority Having Jurisdiction) has been known to want to look at the records.