Why did the Dry Sprinkler System Freeze? 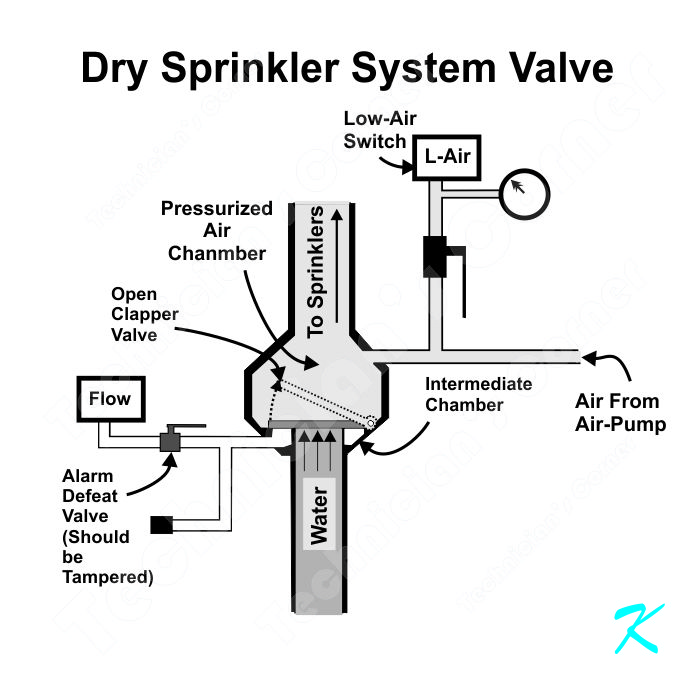 I have an investigation in which a flow alarm switch and alarm monitoring system may not have initially functioned properly. I was told a compressor for the dry system failed allowing water to enter the pipes but the flow was not sensed by the system. Later the water froze causing the fittings and sprinkler heads to fail. The water flow from the failure was sensed by the alarm system.

My question is this:

Will static water in the piping be sensed by the pressure switch? In other words, if water filled the system and the switch failed, would the initial pressure change still exist causing the switch to activate while the water was in the line?

I'm not there to see exactly what happened, but I can at least show a little bit about what goes on.

Analysis of the Dry Sprinkler System

All of these parts interact with each other, and investigating failures have to take all of these into account to understand the cause.

Dry System Valve - This is a clapper valve assembly that has 3 chambers. There is a clapper (somewhat flat metal plate hinged on side) that is normally used to separate the 3 chambers.

Above the clapper plate is the dry sprinkler system. This chamber commonly has 40 psi (75 kPa) of air pressure, which is normally holding the clapper valve closed.

Some dry systems have an accelerator that will allow the clapper valve to open in a timelier manner.

The dry sprinkler system is a long thin air tank. It holds a lot of air. When heat from a fire melts a fusible link on a sprinkler head, air is let out and the pressure starts dropping. On big dry sprinkler systems, it can take as much as several minutes to let out enough air through a sprinkler head to drop the air pressure in the dry system from 40 psi (75 kPa) to 16 psi (110 kPa), allowing the clapper valve to open. Fire marshals don't like taking that long to start flooding the dry system.

In reality, whether it's moving or still (static), water has to be under pressure to activate the flow switch. The switch only detects pressure; the normal interpretation of sensing high pressure is that water is flowing.

I call it an alarm defeat valve because that is its function; the defeat valve prevents pressure from the intermediate chamber from reaching the dry system waterflow switch (pressure switch).

There are two reasons that this valve is installed.

The other reason for the alarm defeat valve is to allow the sprinkler company to service and test the dry system valve assembly, without evacuating the building.

Inside the switch, if the setting for the pressure is too low, the low air switch won't get a chance to turn on. That's because before the pressure has dropped enough for the pressure switch to sense the low pressure, the clapper valve opens and floods the dry system with city water pressure.

If the low air switch is set correctly, but the accelerator accidently trips the clapper valve open before the switch can detect low pressure, the low-air switch won't turn on.

Water Floods the System, but No Alarm

There are three possibilities where the dry sprinkler system can be flooded but not be detected by the fire alarm system.

Another question that needs to be asked is "Did the fire alarm system show that there was a low-air condition before the dry system was flooded?"

There are three possibilities where the air pressure in the dry system didn't activate the low air supervisory alarm in the fire alarm system.

The low-air switch was not adjusted correctly

What is a Stair Pressurization Fan (SPF)?
Which Way Does Electricity Flow?
What's the Difference Between Class A and Class B?
What Makes the End of Line Resistor So Important?
What is a Flyback Diode?
What is a Fire Alarm System?
What is an RTU (Roof Top Unit)?
What Causes an Open NAC?
Learn about fire alarms, one article at a time -