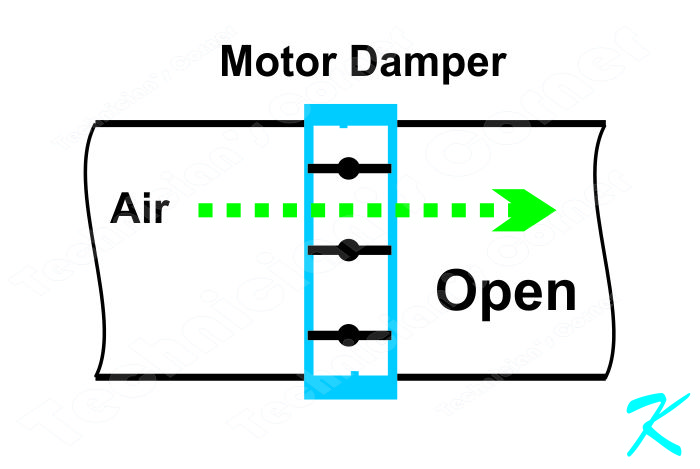 I'm hoping you can help me better understand what the difference is between an FSD and Fire Damper.

The first answer is that a FSD is a Fire/Smoke Damper that closes with either fire or smoke, and the Fire Damper closes only with fire and stays open with smoke. There are similarities and differences between them. Either one can be manually reset or automatically reset (opened).

All air duct dampers are inside air ducts, even short air duct vents between rooms. The length of the air duct may be as short as 4 inches (about 10 centimeters) or as long as hundreds of feet or meters. The dampers are usually located at the fire or smoke walls, used to prevent the spread of fire and smoke.

Because air ducts are openings in the fire walls between fire zones, the air ducts require some way of automatically closing should there be a fire. 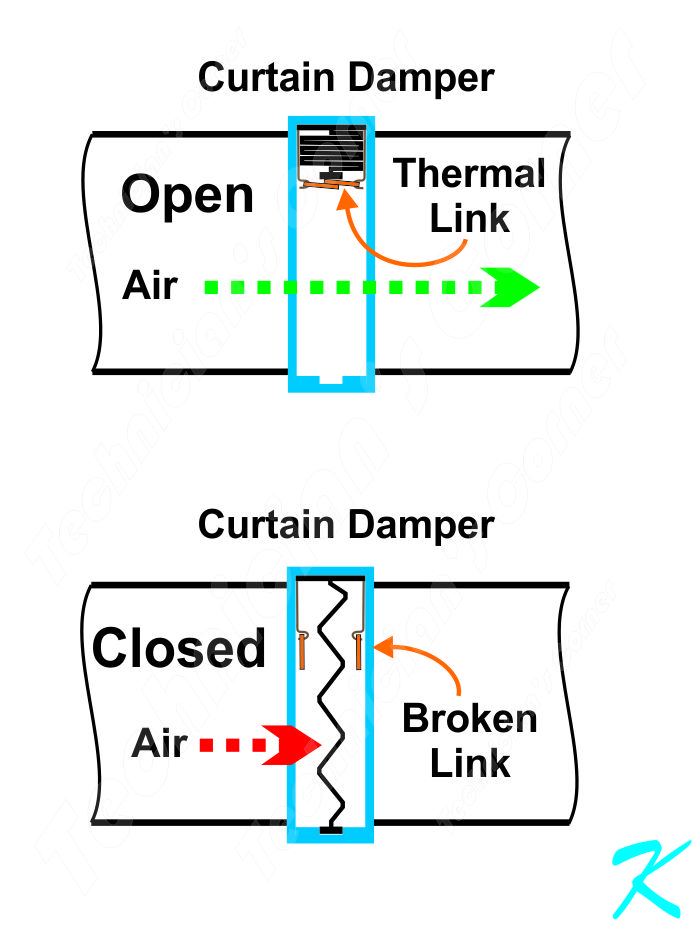 The manually reset damper is a curtain that drops down to totally block air movement when fire or smoke is detected. The curtain is folded up metal at the top of the damper and held up with a thermal "fuse" (two pieces of metal with calibrated low temperature solder keeping the pieces of metal together).

Even though the curtain type damper is totally inside the air duct, the damper has to be accessible from the outside in order to inspect it and to reset it. The access is either with a removable hatch on the duct, or a removable grate in front of the duct opening.

Fusible thermal links are installed even at the bottom of trash and laundry chutes to prevent fire from getting into the chute and using the chute as a chimney to spread fire from floor to floor. 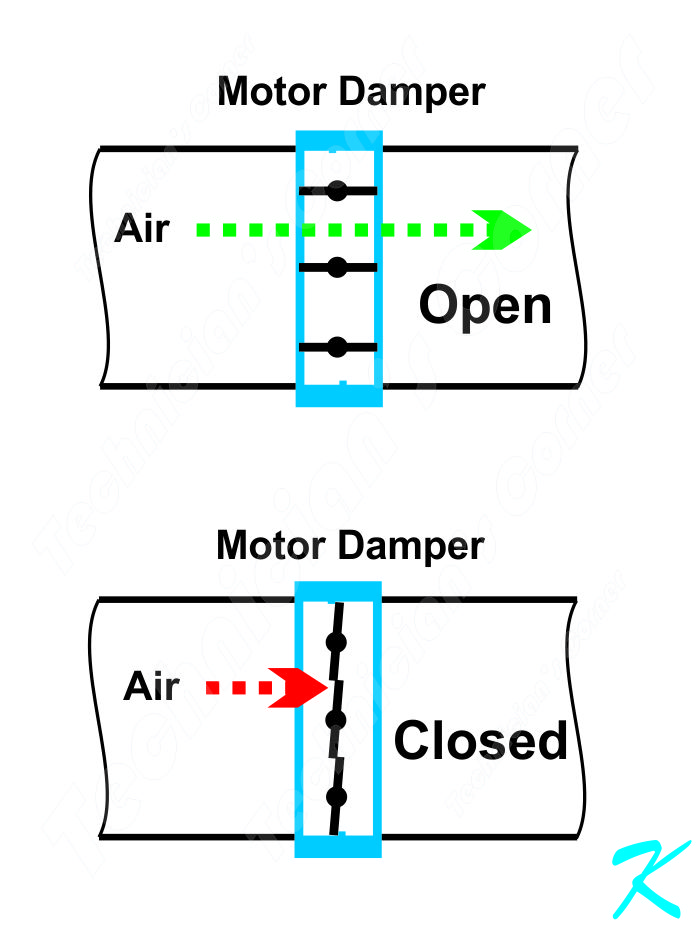 Like Venetian Blinds, motorized dampers have louvers. When the louvers are turned one way, they let the air through, and when turned the other way, they block the air. When looking through the inspection access, you can see whether the damper blocks the air or not.

Because the motor used to keep the damper open is always turned on, you can put your hand on the motor and feel that it is warm. If the motor is cold, it is not working.

The dampers can be closed with smoke in the air duct, or with heat from a fire in the air duct. In some cases, both a smoke detector and a heat detector installed and either one can close the damper.

If the detector is just a thermal link which comes apart when low temperature solder melts, there is no signal to send to the alarm panel. If the solder in the link melts for any reason, the curtain just closes and someone will have to figure out why the air stopped.

Sometime before the turn of the century (the year 2000 is the turn of the century) someone figured out that the air handling equipment isn't always turned on, so air is not always being pushed through the dampers. This means that fire or smoke detection in an air duct can't be relied on to detect fires, so duct detectors (both heat and smoke types) usually aren't considered to be fire alarm devices. Therefore, in most cases, any alarm that they activate has to be supervisory and not fire alarm.

A fire damper is activated by heat from a fire inside the air duct. The heat can be detected by a fusible link, or by a heat detector in the air duct.

Both Fire and Smoke Damper (FSD)

Both a heat detector and a smoke detector are used to close the damper.

Motor Shut-down - If the damper is automatically reset with a motor, the motor loses power and shuts the damper when either the duct smoke detector or when the duct heat detector is activated with smoke or heat.

Electro-Thermal Link - The link is a thermal fuse with a plus. For the heat detection, there are two pieces of metal held together with low temperature solder (just like the fusible link described earlier) and it has an electrical heater (that's the plus).

A common problem with this is that if there's a false activation of the smoke detector or the duct detector, even if the detector is just being tested to see if it works, the heater melts the solder. Then the electro-fusible link has to be replaced and wired in before the damper can be held open again.

There is a grey area between what the HVAC people do and what the fire alarm people do. Sometimes the installation, servicing, and testing is totally the responsibility of the HVAC people, sometimes it's totally the responsibility of the fire alarm people, and sometimes the two trades have to work together to install, service, and test the systems.