Which Proposal - Module in Panel or in Stairwell?

Input modules have to be used either way. Short term, it might be a little cheaper to use the old wiring for the tamper switches. But in the long run, putting the modules in the stairwells will cost a lot less because of changes that have to be made to the fire alarm system in the future. 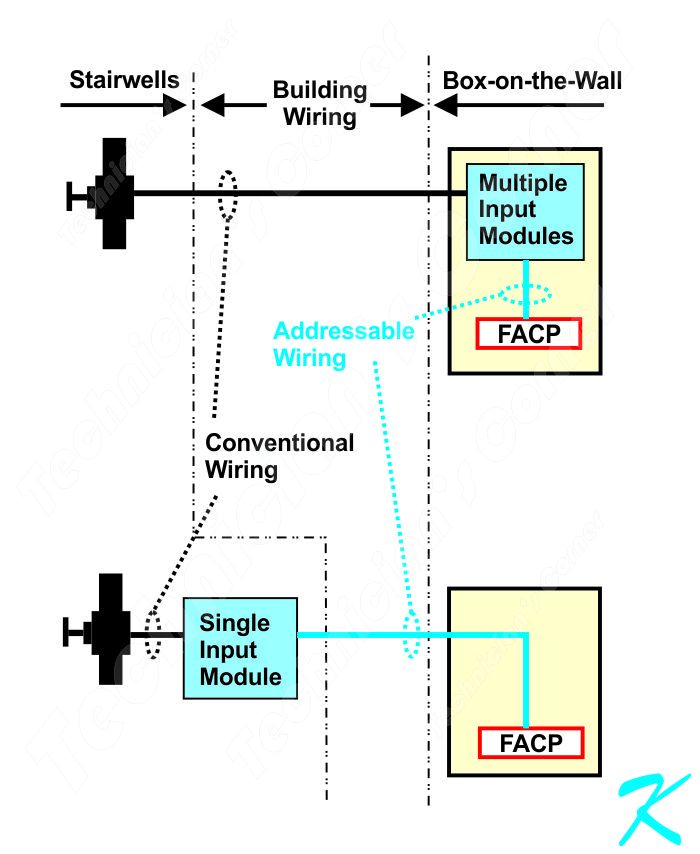 I'm involved with the HOA (Home Owners Association) of a multi-family building complex (3 adjacent buildings, 7 floors each). The buildings have waterflow switches in the basement and tamper switches along the sprinkler risers on each floor. The switches are connected to conventional fire alarm panels - one per building - in zones by floor.

Question: We're planning to have addressable panels installed and we've seen two approaches proposed by vendors for connecting the switches. One proposal uses addressable input modules at each switch, while another uses addressable zone modules in the panels. Is one method better than the other? Since the switches are already in zones by floor per building, they can be pinpointed already, so that shouldn't be an issue - curious if there are other factors to consider.

Thanks for any thoughts, T K

Right now, though, the cost of the system is probably lower to go with the zone input modules at the panel. Later, if something has to be changed, the cost will be lower if, at this upgrade, the addressable modules are installed at the tamper switches.