What do Alarm Output Modules do on the SLC? 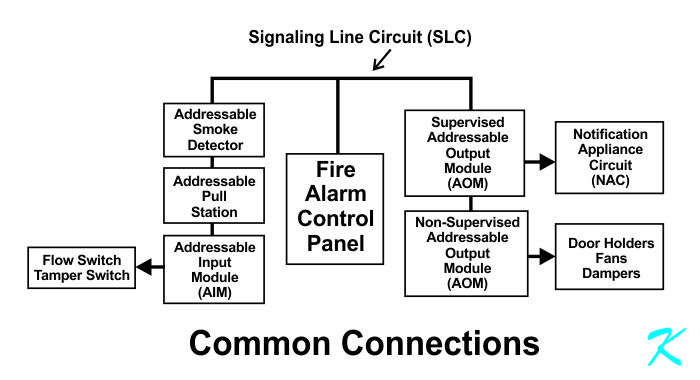 I was looking at your website and first of all, I wanted to thank you for such good content. I've learned a lot from it!

I have a question though, regarding AOM's (Alarm Output Modules) and SLC's (Signaling Line Circuits). For me, the concept would be the following:

AIM's (Alarm Input Modules) are on the SLC because they give an input to the system, that is, they signal the system that something is happening, so I find it logical to find an AIM on a SLC circuit.

However, AOM's are also found on the SLC circuit. I don't understand how an AOM is going to act on a piece of equipment (for example, by starting an extractor fan to get rid of some smoke) if it doesn't receive a signal to do so in the beginning. I would find it much more logical to find it on the NAC (Notification Appliance Circuit), because when there's a problem, the NAC circuit will reverse the polarity, and for me that would be the "go" signal to start a fan or something.

How are AOM's activated if they are on the SLC circuit?

Again, thank you very much for taking the time to write all the articles and share your knowledge with the rest of us.

Detecting this power is what the technician is seeing when connecting a voltmeter to the circuit while troubleshooting.

The other purpose of the SLC is also to carry communication signals between the control panel and the addressable devices attached to the circuit. These signals can be primarily digital data (for a digital SLC), or a mix of digital data and pulse-width data (for an analog SLC).

Both Input and Output Signals on the Signaling Line Circuit

The SLC is a communication path, it sends signals both ways along the pair of wires making up the SLC.

The most common use of an Addressable Output Module is to actually operate a separate NAC circuit, somewhere in the building away from the control panel.

The panel sends a device address out using the Signaling Line Circuit, in essence saying "Device 27, are you there?". Device 27 had better call back with "Here, and Normal" or the panel assumes that there's something wrong with device 27, and turns on its trouble light.

Functionally, the main difference between an Addressable Supervised Output Module connected to the SLC and a Notification Appliance Circuit (NAC) on the main circuit board of the control panel is its location. The Output Module is outside the panel while the NAC is inside the panel.

The screw terminals of both provide power to a conventional NAC (Notification Appliance Circuit). The two are so similar that to move the wires so they land on one or the other's NAC terminals (the control panel or the NAC terminals of the Supervised Output Module), the only thing that needs to be changed is the end of line resistor at the end of the circuit.

In both cases, the panel's power supply and the external high-power source, the voltage polarity is correct to power the horns and strobes on the NAC.

When there's an alarm, at least from a practical point of view, when the relays are turned on, the voltage polarity on the NACs for both types of circuit is reversed.

NAC is for Horns and Strobes

Thank you very much for such a comprehensive answer!