What is a Short Circuit?

A short circuit is an unwanted, shortened path that electricity takes, bypassing whatever is supposed to be powered. Because it's a shortened path, there's a huge amount of current flowing. . . at lease until the circuit breaker trips and turns off the electricity. 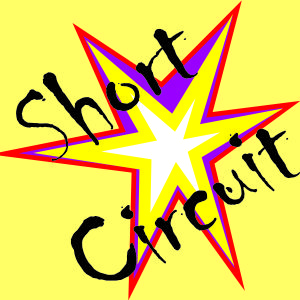 What you see is a spark and the circuit breaker blows. But there is danger of later fires if hidden problems aren't fixed.

Unlike that small hole at the end of the pipe, the electricity flashes around the device like water gushing out the end of broken pipe.

Sometimes a spark can be seen, sometimes there's just a smell of burnt material, and sometimes nothing is seen or smelled, the circuit breaker is just blown.

Problems with a Short Circuit

No one can predict were the flood of electricity is going to flow when it travels around the intended circuit. Hopefully a person isn't in the way, and hopefully the wires don't heat up causing a fire with the gush of electricity flowing through them.

But beyond that, often there's some charring of some of the connections and materials around the short circuit. After the short circuit is stopped, these complications may still be there. Sometime later, when just a normal amount of electricity is used by an appliance or other electrical device, the charred connections or material could become problematic. Any charring or weakened connection needs to be fixed or it can cause a fire months to years later.

When there's a short, make sure that the cause of the short circuit is fixed, and also make sure to inspect the whole electrical circuit for hidden damage.