Aren't Those Coat Hanger Racks on the Wall?

The sprinkler heads on the wall are there to stop fires. Using them for coat hangers or decoration hangers can accidently set them off, spraying foul smelling water over everything, and causing lots of water damage. 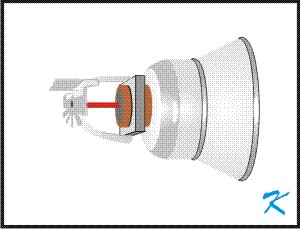 Even though it looks innocent, this sprinkler head is meant to fight fires. When that red glass vile filled with temperature sensitive fluid breaks, the plug comes off. After that, nothing stops the water.

Hotels, motels, apartment buildings, condominiums, townhouses, and some newer private homes, all have automatic fire-fighting sprinkler systems. Without anyone needing to do anything, heat from a fire will turn on the water and water sprays out from the sprinkler head.

Because these are places people dwell in and the rooms are people sized rather than business sized, the sprinkler heads are on the walls.

To many people, the sprinkler heads are just chrome plated metal devices on the wall. They look harmless, too small to actually do anything. Besides, the wall fixtures (sprinkler heads) have never done anything before, they're just there.

But these things scare me. It's not that they can hurt me; the best they could do is get me wet. What scares me is the damage that they are capable of wreaking to the house or apartment building.

To start with, they trigger easily. The only trigger for a sprinkler head is supposed to be heat from a fire. In essence, the heat breaks a fragile temperature sensitive element inside the frame of the sprinkler head.

All that needs to happen, though, is for the temperature in the room to raise enough above a critical point. Once the temperature is high enough, that fragile heat sensitive element breaks. Suddenly the sprinkler head is spraying water.

When there isn't a fire, though, what triggers a sprinkler head more often is the red glass heat sensitive element inside it is bumped and then broken. The fragile trigger element can be broken with a coat hanger, a holiday decoration, or anything else hooked or placed on the sprinkler head mechanism.

Oh, this isn't nice water like the water coming out of the kitchen faucet. This water has been sitting in the pipe for years and it really stinks. Not only does the water stink, but it comes out black and stains anything it comes into contact with.

Lots and Lots of Water Comes Out

For example, if a sprinkler head sprays water in a 10th floor apartment, water damage will be in the 9th floor apartment below, and in apartments below that, possibly all the way to the 3rd floor. (I've seen the damage.)

The Fire Alarm System in the Whole Building Sounds Off

The Fire Department Shows Up