How Do You Let the Smoke Out of the Apartment? 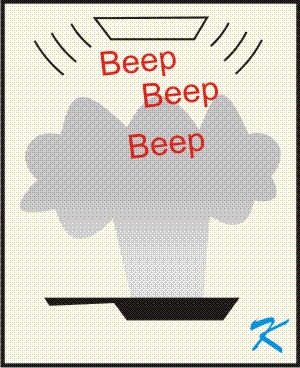 When the apartment's smoke alarm makes noise, but there's no fire, the first impulse is to let the smoke out of the apartment by opening the door into the hall. This is a problem because the building's common area smoke detection system will also detect the smoke.


OK. Now the bacon is overcooked and, making the smoke alarm sound off, the apartment is full of smoke. That kind of thing happens.

What do you do now?

Letting the Smoke Out

Because nothing else really happens, letting the smoke outside is good.

The smoke alarm in the apartment is a stand-alone alarm, the rest of the building's occupants don't hear it. You're only one the smoke alarm alerts.

Let the Smoke Outside -- Not into the Halls

If the smoke alarm in your apartment goes off because the bacon is overcooked, air out the apartment to the outside. That won't be noticed by anyone.

Just don't open the door to the hallway; opening that door causes too much commotion.
Check It Out