What Happens When Water is Thrown on a Cooking Grease Fire?

When water is thrown into a pan of burning cooking grease, the water bursts into steam and throws the flaming grease all over the kitchen. Instead of throwing water onto burning grease to put out the fire, put a pan lid on the pan to extinguish the flames. 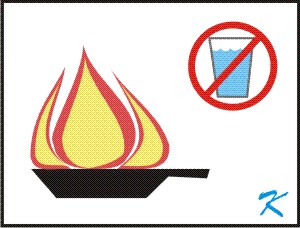 Putting water on a grease fire on the stove becomes a nightmare ball of fire.

Cooking is good; grease catching on fire while cooking is bad.

With all that sizzling crackle and pop, frying bacon sounds mouthwatering. But when there's a grease fire on the stove, and water is used to try and put it out, that same sizzle becomes a nightmare ball-of-fire.

Water on a Grease Fire

Water on grease fire is bad. It's not like the water just sloshes the grease out of the pan, spreading the grease fire; the water, as it hits the burning grease, bursts into steam. It violently throws liquid fire (burning grease) in all directions, including straight up.

This is a ball of fire.

The burning grease lands everywhere, catching the cupboards and the counters on fire.

Instead of Dousing with Water

Think about it ahead of time. In the back of your mind, even before starting to cook, have an idea of what you'll do in case of a grease fire.

Keep in mind though, if you think there's any danger to you, or if, after putting a lid on the pan, the fire continues, get out of there and call the fire department. You're too important to risk getting burned.

Avoid the nightmare... Just don't throw water on that burning grease; don't use the water to splatter the grease and spread the fire.