What Value Should be Used for a Flyback Diode?

I need to determine the flyback diode size and location when using a solid-state relay or mechanical coil relay. Can you help me? 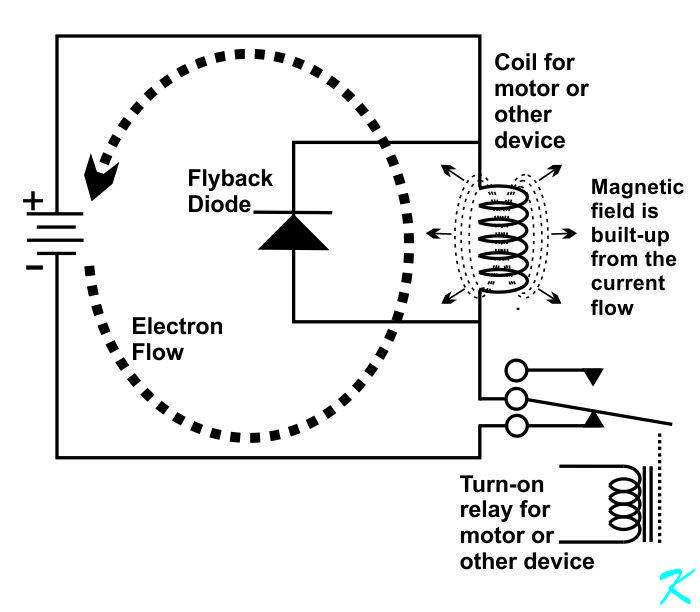 When the motor current is turned on by the relay, the current flow isn't instant, the current flow is slowed down (impeded) as the electrons in the motor builds up a magnetic field. That isn't the problem with the relay contacts; a slow building up of current (in the microsecond to millisecond range) doesn't damage the contacts.

The constant flow of electrical current isn't the problem either. 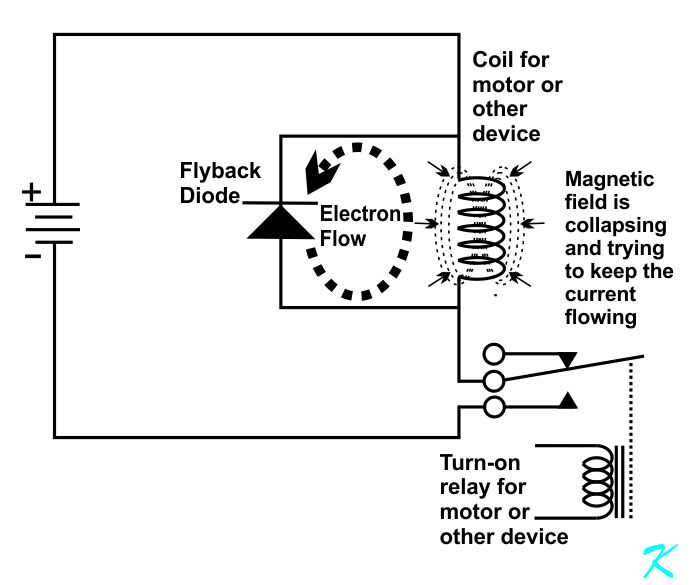 It's the sudden relaxing and opening up of the contacts of the relay that's the problem. The collapsing magnetic field pushes on the electrons in the wire. The extra push is a voltage surge, produced by the coil, keeping the electrons moving in the same direction through the coil.

If there's no safety valve (flyback diode) to shunt this current back into the coil, the collapsing magnetic field increases the voltage of the coil to whatever is needed to push the electrons that were originally moving through the coil.

I've seen this voltage surging up to several hundreds of volts. The duration of the voltage is extremely short, microseconds to milliseconds, but the voltage will push the electrons across whatever turned off the current. In this case, the electrons are pushed across the opened-up relay contacts, burning and pitting the contacts.

The diode is a regular diode, rated in forward current capability and reverse voltage capability.

Keep in mind that in electronics and electricity, there is no such thing as absolutes. It better to leave a little headroom on the side of safety than to calculate to the fourth digit.

Because the collapsing magnetic field doesn't increase current, the minimum forward current capability of the diode is the normal current rating of the motor. According to the data, 1000 watts, at 60 volts gives slightly less than 17 amps.

Although they don't say it this way, manufacturers tend to provide their ratings as "Under the Best Possible Conditions, with Immaculate Heat Protection in the Installation, these Ratings should NEVER be Exceeded, even for Short Durations".

OK, any calculation that's come up with should be doubled, just for component safety.

For the forward current capability of the diode, it should be twice the 20 amps, or actually 40 amps. Higher forward current isn't a problem, it just means that the diode is bigger and more rugged.

If the exact ratings aren't available, go to the next higher rated diode.

Close to the Source of the Voltage Surge

As an example, life safety fire alarm systems never use solid-state relays anywhere in their system. They require total isolation.