How Long does a Sealed Lead/Acid Battery Last?

Sealed lead/acid batteries are commonly rated to last 5 years, but that's the best case scenario. The lifetime of a battery is shortened by shelf life, gradual loss of capacity, the temperature that the battery is stored at and used at, and the actual current used from the battery. 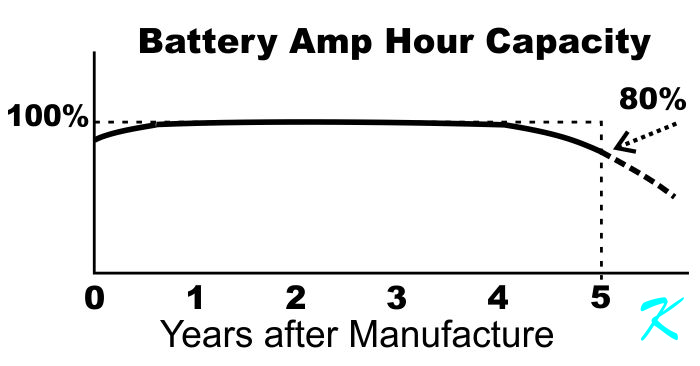 The common rule-of-thumb is that a lead/acid battery will last about five years from the date of manufacture. There are, however, several factors that shorten up that lifetime.

Half Shorter; Half Longer

You may be lucky and have one of the batteries that lasts longer than 5 years, but don't count on it. When you buy a lot of batteries, about half of them last less than 5 years.

Amp/Hour Rating versus Rate of Use

Batteries are rated in Amps of Current per Hour (Amp/Hours or AH). How fast you're using the current does affect the capacity of the battery.

Often, when testing batteries, the manufacturer measures the capacity of a battery over 24 hours. For an 8 AH battery, the current that the manufacturer uses for the measurements is more like 1/3 of an amp.

The lifetime of a battery is affected by the remaining shelf life, its gradual loss of capacity, the temperature that the battery is stored at and used at, and the actual current used from the battery.

Other less common factors are also involved, so the Amp/Hour Rating on a battery is not a hard and precise science.