How are alarms hardwired to field equipment in a typical process plant? 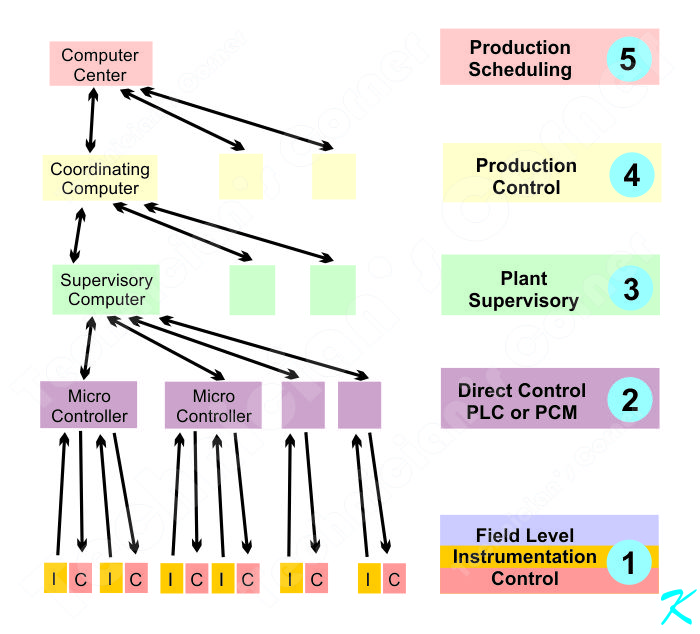 Subject: Alarm Connection to Devices and DCS or PLC

I came across your article, "How Are Fire Alarm Loops Supervised".

I am a Process Safety Engineer but I am trying to understand alarms representation on a P & ID. I am sorry if this is not your area of expertise. Please, permit me to ask the following questions:
Once again, sorry to bother you with such questions that may not relate to your expertise.

Should you have any explanation to make me understand how alarms are connected physically in a process plant, it will be highly appreciated.

This is the overarching control system for the entire plant or refinery. This consists of a Computer Control System (the control system may consist of one computer or even a computer with sub-computers and sub-sub-computers), Direct Control Modules, and Field Level Devices.

The computers talk to each other and to the digital control modules over a network of short hard-wires, digital switches (routers), and fiber optic communication.

Often times the individual computers (Nodes) can become "Stand Alone" computers. If the main computer fails or the computer-to-computer data network fails, at least the subordinate computers will continue to operate, possibility shutting down the process on an emergency basis.

These are devices that control the process according to a sequence of events that happen. When the proper events happen in the correct order, the PLC activates other actions.

Usually, the PLC is also controlled and monitored by a computer or computer network.

The PLC has two basic functions:

Like an overall blueprint of a building, the Piping and Instrumentation Diagram (P & ID) is a block diagram; it's an overview of how the whole process system operates.

Answers to your questions:

I want to thank you so much for this detailed explanation. I think you really got into my brain to understand my confusion. My problem was mixing wiring and programming. I was thinking when a device is hardwired, it will be connected by wires to the operator's computer. I did not know that there is an interface between the device and the operator's computer.

It appears you are an expert in fire safety engineering. If you are, I may want to keep you in my contacts in the event that I have a project in the future that may require your expertise.

Once again, thanks a lot for your willingness to help.