Does a Second Ground Rod Protect Circuits from Lightning?

It's almost counterintuitive, but unless the two ground rods are bonded together using heavy wire, a second ground rod is worse than a single ground rod. 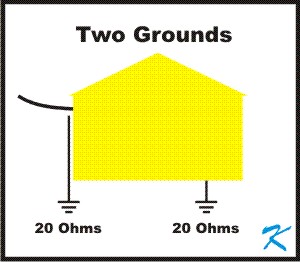 When adding the resistance between ground systems, that's a minimum of 40 Ohms. Lightning is going to damage anything that is connected between both grounds.

With two ground rods that aren't connected together, lightning puts most of its power into one earth ground connection or another. One ground stake is going to be affected with a voltage spike much more than any other.

This peak voltage has a very short duration, but it's there.

As the building gets the 200,000 volt spike, the second ground rod holds the voltage on the other incoming wires closer to earth ground voltage potential. This voltage difference, between the incoming signal wires and the building electrical ground, could be 200,000 volts or more.

There is equipment standing between those incoming signal wires and building ground. Be it a fire alarm panel, a security panel, a cable TV amplifier, a CCTV camera, a telephone, etc., the only route for that 200,000 volts is from the building electrical ground, through the equipment, and into the wires being held to earth ground potential at the signal wire entrance. Something in the equipment is going to give.

Lightning Coming on the Wire Entry

Of course, if lightning strikes a power pole outside, or the PIV (Post Indicator Valve), or another building connected with signal wires, the same story can be told in reverse; but the result is the same: lightning damages the equipment.

This is why, according to the National Electrical Code (NEC), if an extra copper stake is driven into the earth, by using heavy wire, that extra copper stake needs to be connected directly (bonded) to all other copper stakes driven into the earth. That way, when the building gets its voltage spike, all earth ground connections will get approximately the same voltage spike, and there will be better lightning protection for the whole electrical system.

I read your article on second grounding rods and lightning protection and found it to be the best explanation I've found as to the "why" behind the code.

My home has an existing 40' TV antenna tower which I am trying to confirm if it is properly grounded. Currently there is a grounding rod installed at the antenna, clamped to the tower via 4 AWG stranded copper. The antenna lead has a grounding block at the top of the tower and the lead proceeds from there into the home.

Having reviewed NEC 810, I plan to add a grounding block/surge protector for the antenna lead just prior to the lead entering the home, grounded with 10 AWG.

Seeing as you have some expertise in this space, I hope I can ask you a few questions:

Is there a way to confirm the bonding of the ground rods with a simple ohm reading between the antenna grounding rod and a nearby grounded outlet? The resistance between the tower ground and a nearby Air Conditioner circuit ground fluctuates between 17-20 ohms.

If I can't confirm the bonding, is it acceptable to route a ground wire (min 6 AWG, likely would use 4 in this case) through the basement, bonding to the ground wire that comes in from the service entrance? Due to patios and landscaping, there is no easy/direct exterior path to complete the bonding.

Looking for any practical advice on how to make sure this is done properly. Unfortunately, I had nothing to do with the original installation so I can't be certain how it was done.

Before doing the work of installation, make a few measurements the easy way. Connect a wire to the main building ground rod and run it on the ground to right next to the ground rod for the TV antenna. You can use your #4 AWG wire, or if you don't have that right now, use at least #18 AWB wire. For your measurements, this is basically an extension of the main building ground.

Without the electrical bonding wire between the two ground rods, the only conduction route that 100,000 volts goes through is the power cord and tuner of your TV set.

That explanation, by the way, is a summary of the code writer's commentary in an older version of the National Electrical Code Handbook, published by the National Fire Protection Association (NFPA). They're the ones who said you have to bond the ground rods. The Handbook is available from the NFPA's website, next to the NEC Code Book. Yes, the Handbook is more expensive than just the Codebook, but to me, understanding the reasons behind Code is worth every penny of the extra cost.

Ground Bonding Wire Inside the Basement versus Outside Around the House

One aspect of lightning is that it's a very short duration pulse: lightning has very high frequency harmonics. Because it's a high-frequency pulse, any bends in the bonding wire increase the wire's inductance. Inductance is a wire's resistance to high frequencies. Also, any wire length has at least a small amount of inductance, so the shorter the wire, the less the inductance.

At a high frequency 10,000 amps, reducing the inductance is important.

Thank you very much for your reply, it is very helpful! And has convinced me I need to correct this via either interior or exterior bonding with minimal bends in the wire.

I've also been in touch with a local electrician and will be bringing this system up to code as soon as possible.