How is this Full Wave Bridge Rectifier Used?

I have asked for your insight a couple of times and bought your book "Hunting Grounds" but I also wear another hat, which is installing and troubleshooting canning and packaging equipment. So, this may not be in your bailiwick but never hurts to ask.

The canning company has a 120v small vibrating motor that energizes so as to slightly vibrate a tall paper cylinder of can tops, so one drops on each filled can as it passes by. It stopped receiving the power on its 120vac hot leg/wire.

As we all know a bridge rectifier turns AC into DC.

I have never ever seen a bridge rectifier used in an AC only circuit. The diodes seem to block flow no matter the direction of the sinewave.

I will replace the bridge rectifier, but for my edification, any idea on what the rectifier's role is? 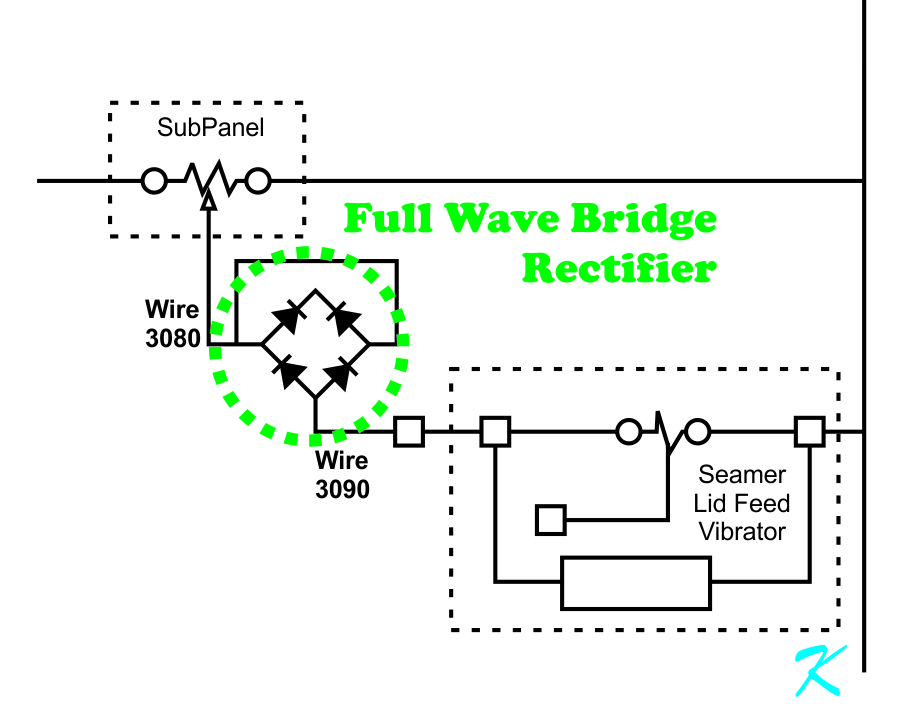 Keep in mind, any standard rectifying silicone diode conducts electrical current one direction, but not the other.

To come up with the rectification needed, I've gone so far as to make my own FWBRs out of four single diodes. The four diodes, rather than in a single package like a Full Wave Bridge Rectifier, are also separate on quite a few fire alarm power supplies, or on other power supplies. Some manufacturers use four diodes in a bridge configuration, some manufacturers use Full Wave Bridge Rectifiers.

When the four single rectifying diodes are wired exactly the way that the diode package labeled FWBR is wired, the four diodes are a Full Wave Bridge Rectifier. 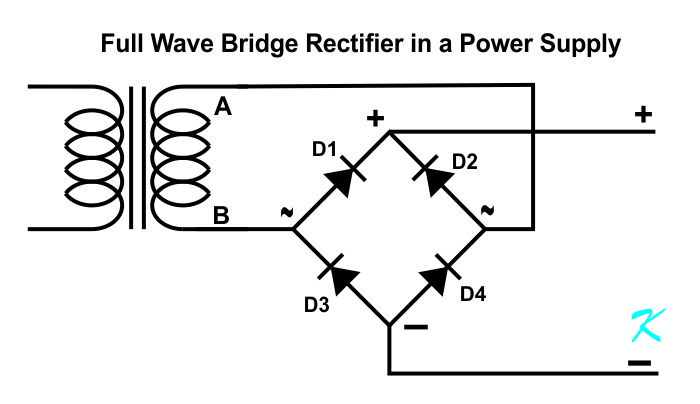 When we look at a Full Wave Bridge Rectifier, we are looking at some diodes used to rectify the full wave of the AC signal, coming on the AC input. The word "Rectifier", in this case, means diode or diodes. The words "Full Wave" means the entire AC signal, and the word "Bridge" shows the configuration for the diodes. 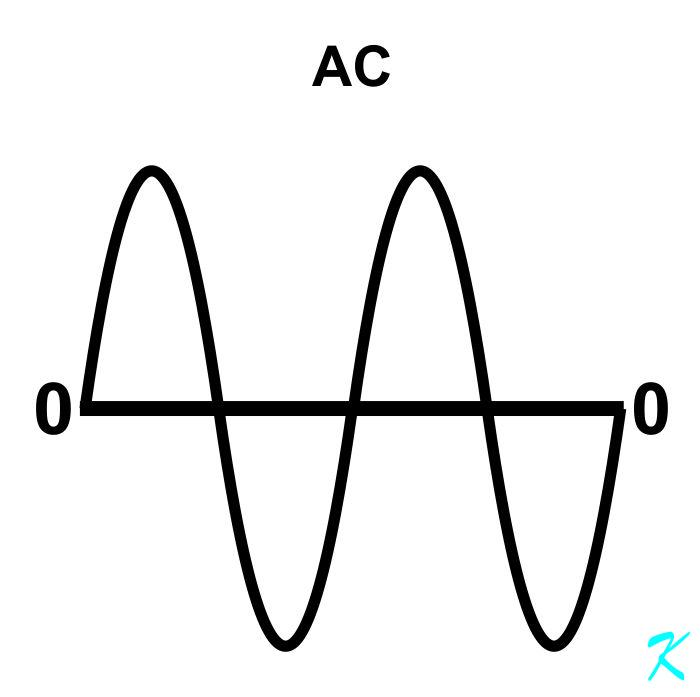 In the Common Wiring diagram, above, the input to a Full Wave Bridge Rectifier is a pure AC sine wave. 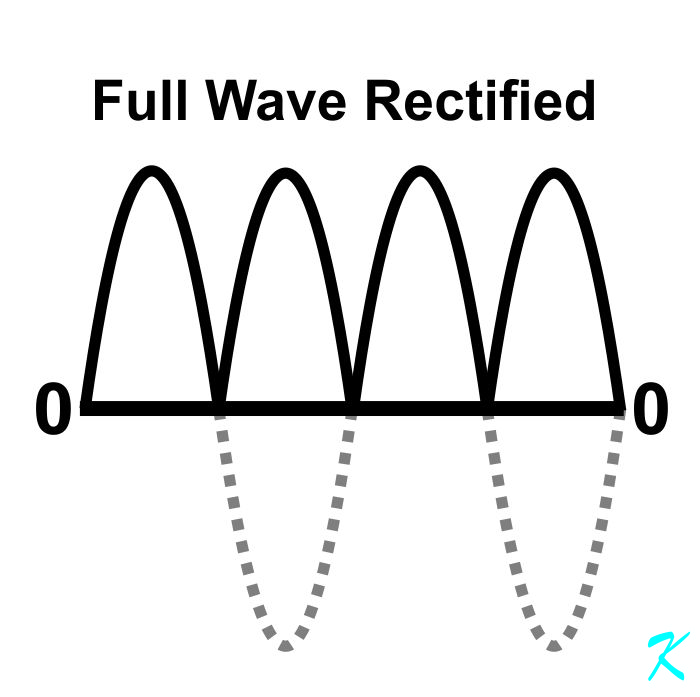 Another way of looking at it is that each of the half-waves of AC on the input of a full wave rectifier produces a positive going pulse. Each pulse goes from zero volts, to full voltage, to zero volts again. 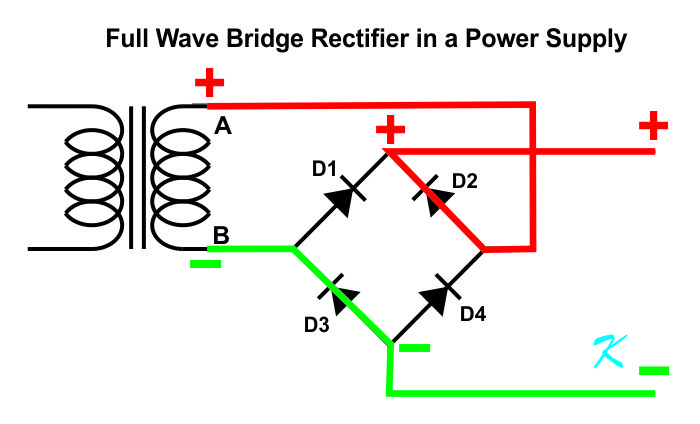 When the transformer is positive on A and negative on B, diodes D2 and D3 are conducting, making the output positive. 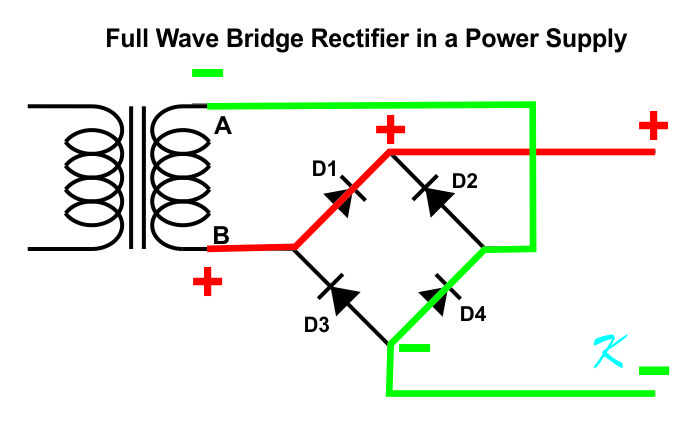 When the transformer is negative on A and positive on B, diodes D1 and D4 are conducting, making the output positive. 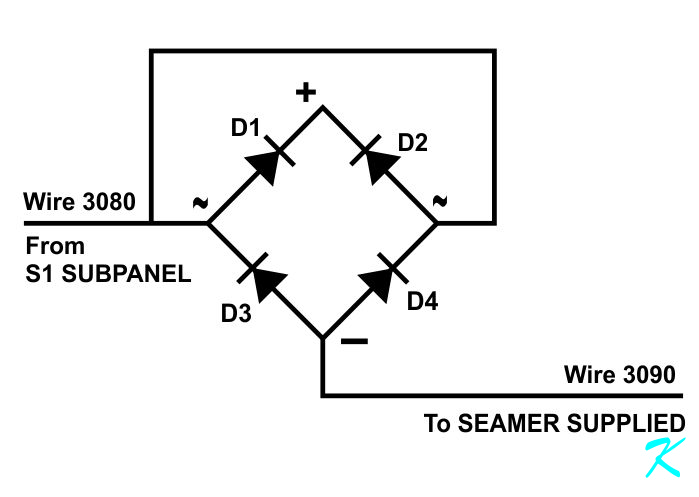 This assembly does look to be a bit confusing. When I get confused, I redraw. That way, I can understand it my way.

This is the exact same circuit, but redrawn. Remember, a Full Wave Bridge Rectifier is just four diodes in the same package. 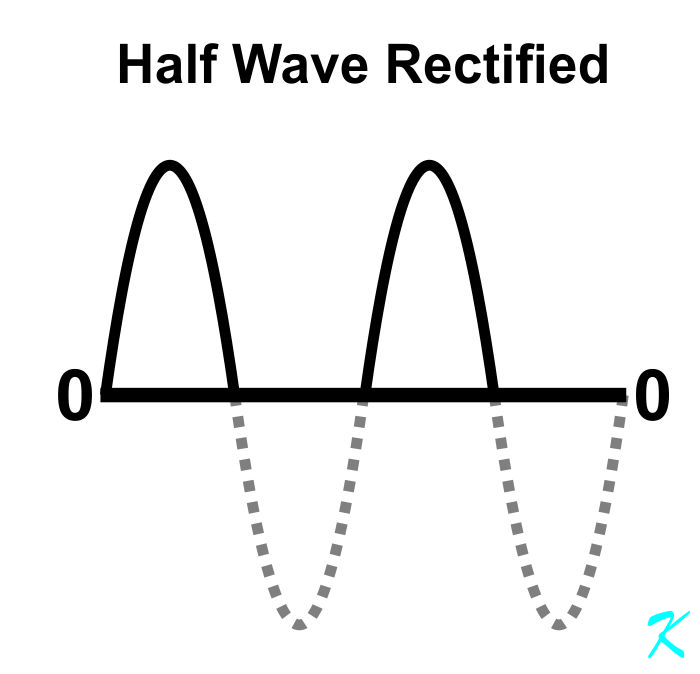 This is what is coming out of the diode assembly on wire 3090.

Another way of looking at it is that each positve cycle of AC on the input of a half wave rectifier produces a positive pulse, while each negative pulse of AC doesn't produce any pulse.

For theoretical purposes, D4 and D3, being in parallel, are a single diode. The package of diodes may say "Full Wave Bridge Rectifier", but the package is being used as a "Half Wave Rectifier". 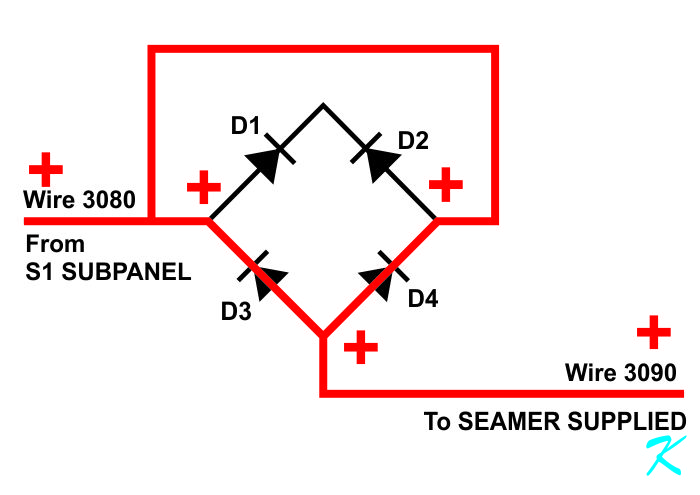 When the signal on wire 3080 is positive, the diode pair (D4 and D3) will be conducting. 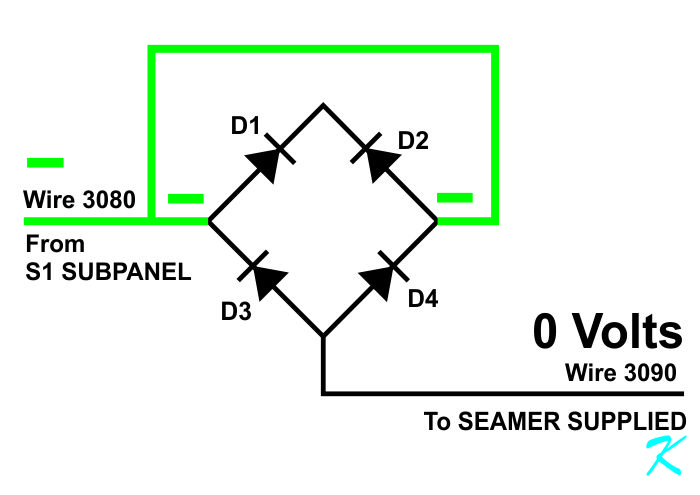 When the signal on wire 3080 is negative, the diode pair will not be conducting.

The rectifier assembly is only letting half of the AC wave through.

The Role of the Full Wave Bridge Rectifier

How Is the FWBR Used?

The actual signal looks like this on an oscilloscope.

I hope, though, that this will help you understand more of the system you're maintaining.