The true answer may be lost to history, but a pull station is a life-safety device. In case it's pulled because of a real fire, it might better that it can't be easily reset than allow it to be put back to normal by the panicking person who set it off. 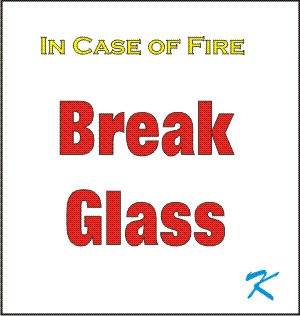 Here, the manual fire alarm station inherently latches on. When sounding the alarm, glass is broken. The fire alarm system cannot be reset until the glass is replaced.

Ever wonder why a manual pull station tends to break when someone attempts to push it back after setting off the alarms? I, too, have been wondering this. To figure this out, one of the keys is to look at the early fire alarm systems.

Anyone in the building could set off the alarms, but only someone in authority could turn off the alarms because stopping the sound of the alarms is like sounding the all clear. Once it's been activated the fire alarm system had to latch to prevent a false "all clear."

Many of the original fire alarm control panels only provided power for the fire horns and supervised the system wiring. They did not latch, and they did not have a reset button.

By the 1960's and 1970's, these original non-latching control panels were mostly phased out of service, but a few were still in operation as late as the year 2014 (Couch was one manufacturer).

Instead of the fire alarm control panel latching, the manual stations themselves inherently latched. They were "break-glass" activated; when a hammer or glass breaker was used, a button would pop out, sounding the alarm.

Once the glass was broken, the alarms would keep sounding until someone replaced the glass. In essence, the manual fire alarm station kept sounding the alarm until an authorized person investigated.

The lever could stick out when someone pulled it, a piece of glass could break showing that it had been pulled, but even when pushed back by someone trying to turn off the alarms, the manual pull station needed to stay on. It had to latch.

Nowadays, all fire alarm control panels latch once they go into alarm, and they stay in alarm until manually reset.

But then again, there may still be a few of the old non-latching fire alarm panels around, so for the time being, pull stations have to latch.

Of course, someone reading this may have more information on the reason so many manual pull stations break rather than being reset. I'd be interested in hearing about it.