Very often, when trying to find a fault in the wire somewhere in a building, follow the wire. Sticking your head above the ceiling, going through a parking garage, following the wire from one room to the next, may be the action that's needed to find the fault. 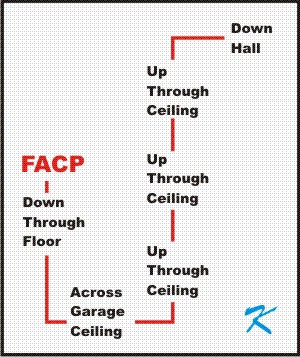 To find the problem, sometimes one has to just follow the wire. This can take a technician to many parts of the building.

Someone once said "Experience is something you gain when things go wrong." Well, wiring issues are things that have gone wrong, and a lot of experience is gained by following the wire and fixing the problem.

For fire alarm systems, one of the more common classes of trouble is problems with the wiring. The wire is hidden and goes throughout the building, so finding the source of the trouble is most of the battle.

Most of the time, as-builts of the wiring for the building are not available, or if they are available, they are obsolete because of the changes made since the original as-built diagrams were made.

The first step in solving wiring issues is to categorize the problem. Wiring problems can be: One way of categorizing these issues can be accomplished by checking the supervision voltage: comparing the voltage between a good zone the bad zone.

Another way of categorizing is to check resistance. The resistance can be measured across the zone wires, and between each zone wire and ground.

Once categorized, if the location of the problem still isn't obvious, the troubles can be located most of the time by following the wire.

The wire leads many places, and is installed in many styles. For fire alarm systems, the wire can be: Also, to get the wire from one room to another, all of these punch through walls, ceilings, and floors.

Following the wire is a guess and verify game. Where the wire isn't visible, guess where it goes and then verify that it goes there.

To verify, take voltage or resistance measurements and compare them to the measurements taken at the panel, or just wiggle the wire to confirm it. After doing this for a while, the accuracy of the guesses get better.

A lot of times with wiring issues, just looking at the wire and following it visually will lead to the problem.

If one doesn't follow the wire, these problems are missed. The thing is, eventually someone will have to find the mystery and fix it.

Following the Wire Above the Suspended Ceiling

Often sticking one's head above the ceiling is the easy way of troubleshooting. If the wire is visible, follow it. The problem may be: (Yes, I know. These are not good wiring practices, but they're done all the time anyway.)

If nothing else, following the wire through the ceiling will show where to look next.

As it passes through the building, there is no magic rule on how to follow the wire: following takes practice, following requires guess and verify.

Following the Wire Behind Sheetrock

If the building is sheetrock over frame, start by injecting a signal on the wire at the panel. Guess where it goes. Then using a tracing wand, pick up the signal outside the sheetrock. Follow the wire as it goes from one place to another behind the sheetrock.

Following the Wire through the Slab (Conduit Imbedded in the Floor, Wall, or Ceiling)

n a side note: Don't assume that conduit protects the wire. It doesn't happen very often, but once in a while the problem is inside the conduit.

Most Wiring Issues Can Be Found by Following the Wire

Just don't assume anything. If the problem isn't obvious, the problem may be a new one. After many years in the fire alarm service field, I'm still finding new and not so obvious problems I couldn't have found without following the wire.

Following the wire doesn't make one better than anyone else at troubleshooting, it just means a quicker way to solve the mystery of hidden wiring problems.