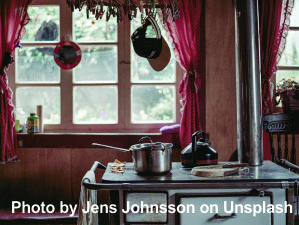 While the number of home fires has been cut by approximately half since 1980, the rate of deaths per 1000 household fires is 10% higher. This means that more progress has been made in preventing fires than in avoiding death in the occurrence of a fire. Though these flames spread due to faulty alarms and nonfunctional sprinklers, the fires themselves are avoidable. Once you are aware of the significant causes of kitchen fires, it is essential to educate your family members and to remain watchful.

There are 28,600 electrical fires per year, according to the U.S Fire Administration. They also report that the months with the most electrical fires are December and January due to increased use of heating appliances. Kitchen electrical fires are mainly caused by faulty outlets and old and overused devices. Refrigerators and microwaves are the leading cause of these fires, with Consumer Reports claiming that the more appliances become complex, the more things could go wrong.

"The best defense for consumers is to register new appliances so you can be notified of any safety recalls and other problems," said Don Huber, director of product safety at Consumer Reports. For appliances that are already in use, be sure to check regularly the List of U.S Products Recalls as it gets updated continuously by the Consumer Product Safety Commission. Also, compare actual consumer reviews about various brands from online shops such as Amazon to ensure that you settle for the appliance that will serve you safely and reliably.

Some of the most common home fires are related to cooking flames and flammable kitchen material, which include oil, alcohol, parchment, and foils. "Though delicious, olive oil is not always the best choice, because extra virgin oil has a low smoke point and it can burn and start smoking if heated too high," warned Jesse Szewczyk, a food writer for Buzzfeed. He recommended using canola oil if you are cooking at extreme temperatures. Grease traps which are metallic containers used to catch used oils and fats to keep them from clogging sewers can also catch fire if not well maintained. NFPA recommends that you empty them annually for home kitchens and quarterly for restaurant kitchens.

Gas leaks and the explosions that follow tend to cause the most devastating home fires. They mostly occur when older or neglected equipment fail to support the flow of gas. This leaves quantities of gas in the air which explodes when ignited. Turning on or off any electrical device, including a mere light bulb, is often enough to ignite the gas. Gas leak explosions are however easily preventable because gas is detectable by smell. You may also notice extinguished pilot lights in gas ovens and stoves, which would mean a compromised gas flow that may be leaking into another part of the stove or behind the walls.

While kitchen fires are hazardous, NFPA claims that most deaths occur when people impulsively try to put them out themselves. They further advise that in the occurrence of a fire, you should run to safety before calling professional emergency services. In the case of electrical fires, never try to extinguish using water as it may lead to electrocution. Nevertheless, with any home fire, ensure that your family has a practical evacuation plan that leads to a safe location.