Why Do We Get False Waterflow Alarm in Spring and Fall?

Every spring and fall we get false flow switch alarms on the same floor. We've replaced the flow sensor several times. I toggle the flow switch a few times and reset the panel and we are usually good for a given time. What do you think?

There are several possible causes of the false waterflow alarms.

A working fire alarm waterflow switch works by sensing that water is actually flowing in a sprinkler pipe. 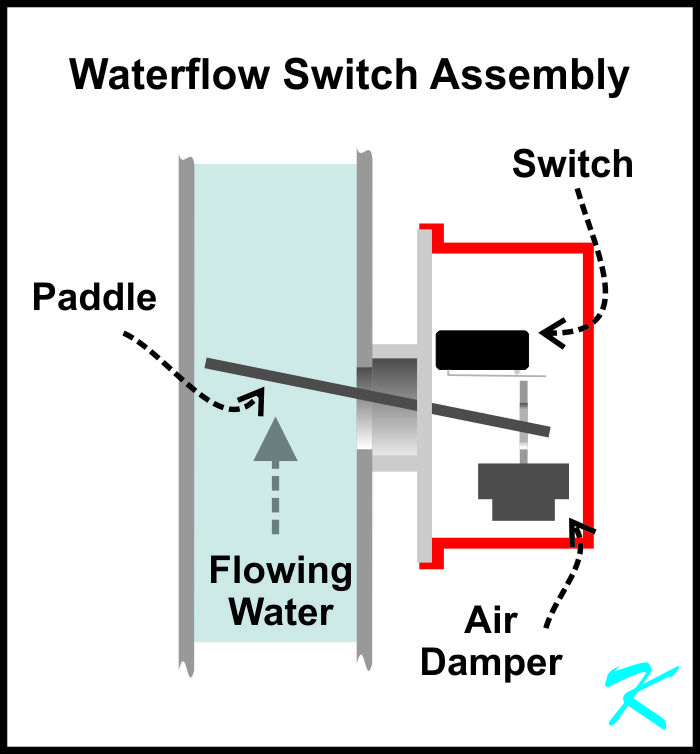 When water is flowing in the pipe, the water is pushing a paddle aside. A lever attached to the paddle moves, and allows an air damper timer to slowly release air. Once enough air is released, then the switches activate, sending the alarm to the fire alarm panel.

Think of the sprinkler system, not as a series of pipe, but as a long, thin, air pressure tank. Compressed air provides the pressure, and water is what compresses the air.

When maintenance is performed on a sprinkler system, like when a sprinkler head is changed or a waterflow switch is replaced, water is let out of the sprinkler pipes. Letting water out of the pipes, though, means that air is let in.

Once the maintenance is finished, water is replaced in the pipes. The air, though, is still in the pipes; the air is just compressed into a much smaller area. In essence, the sprinkler system becomes a long, thin, air pressure tank.

In other words, if there's a very small leak in the sprinkler system, water could be forced back in through the waterflow switch.

The city's water pressure regularly changes. Things like night time to day time water usage by the residents of the city, fire hydrant tests by the fire department, flushing of toilets in the building, etc. all cause the water pressure to fluctuate.

When the city's water pressure increases, water is forced into the pressure tank, or sprinkler system.

It could be that in the spring and fall, the pressure in the city's water system has greater swings, so there is a possibility it can push more water into the sprinkler system at that time.

When water is forced into the sprinkler system, the water flows through a check valve. The check valve is a one-way waterflow device that lets the water into the system, but doesn't let the water back into the city system.

Of course, there could be a leak somewhere else, and the city could push more water past the waterflow switch, into the sprinkler system.

If a drain valve, or a test valve somewhere is leaking, that could be a cause of false waterflow alarms.

Air is less dense than water. The air could be slowly leaking through microcracks in the sprinkler system, and as the air leaks out, water could be forced in to replace the air.

Even water could be slowly leaking out somewhere. Just not enough water to be detected in the building. This is a slim possibility.

Most waterflow switches have an air-based retarder as a built-in delay mechanism. This prevents the waterflow switch from acting too quickly. The delay setting for this is commonly set to :30 seconds or :45 seconds. 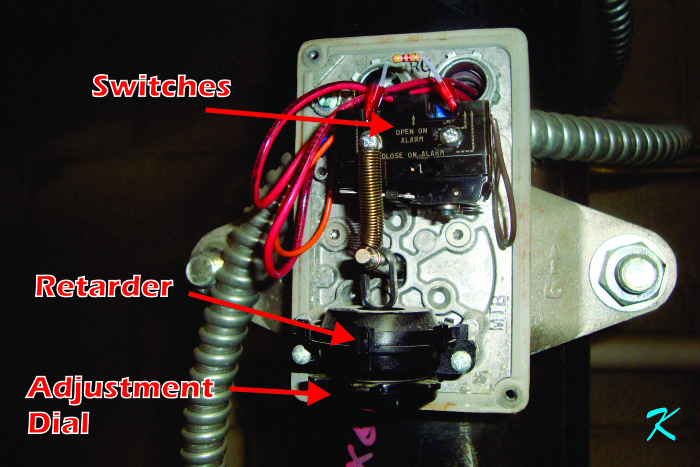 After a few years, the rubber diaphragm inside the retarder can dry out and reduce the time delay. I've seen where this delay has been reduced from :45 seconds to :08 seconds, sometimes less.

The delay is meant to reduce false alarms: when the delay is reduced, there are false waterflow alarms.

Check with the fire marshal to find out how much delay there should be.

Why a Particular Floor?

Another possibility is the sprinkler system has enough corrosion inside it so that once there's a bump in water pressure, the paddle can't return completely. It's possible, but not probable.

Still another possibility is that there's more air trapped in one floor's sprinkler pipes than the other pipes. That could also happen.

Often, the false alarms are caused by a combination of two or more problems. Each problem by itself wouldn't cause the false alarms, but when combined, they gang up and sound the alarm.