Does the N O Mean Normally Open or Normally Closed on a Tamper Switch?

No one can rely on the labels on a tamper switch, the only way to confirm whether the N O terminal is Normally Open or Normally Closed is to Use the Ohmmeter. 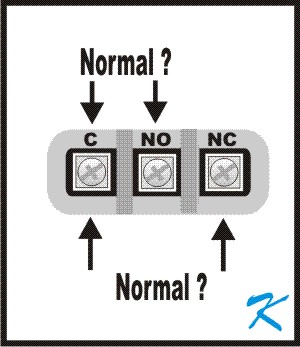 To figure out the normally open and normally closed contacts for switches on fire suppression systems, use an ohmmeter.

Markings by the Third Party Manufacturer

These contacts are often used differently in the assembly.

Once the switch made by the third party is installed inside the waterflow, tamper, or pressure switch assembly, the lever or piston may normally push the button and quit pushing when there's an alarm or supervisory. In this case, the assembly's Normally Open and Normally Closed conditions will be opposite that of the third party's switch contact labels NO and NC.

Then again, the lever or piston may push the button on the switch only when there's an alarm or supervisory, so the label NO and NC are correct for the assembly.

Confusing? Yes. These labels confuse me too.

A long time ago I started using an ohmmeter to determine which contacts to use. That's the only way I could get the wiring right the first time, every time.

Between the mechanical action of the suppression system and the electrical signals of the fire alarm system, the alarm or supervisory switch assembly is an interface. If the ohmmeter says that the NC and Comm contacts on the switch are shorted together when the fire suppression system is in alarm or supervisory, it's the NC and Comm contacts that I land the wires on.
Check It Out
Check It Out