Should Canned Smoke be Used to Test Smoke Detectors? 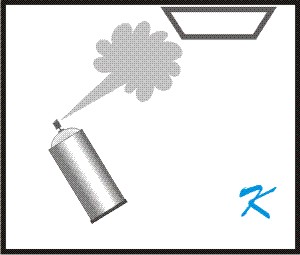 Smoke detectors have to detect a wide range of smoke. People often wonder if canned smoke mimics real smoke or is there something better to use for testing.

There have been many discussions about the best way to test smoke detectors --- canned smoke or real smoke. Without burning down the building, the problem is finding something to test with that mimics fire-caused smoke.

Smoke detectors, though, are more susceptible to false alarms because what they see as smoke can be so many other things.

Just from a single fire, there are lots of variations in the particles --- and the mixture changes as the fire progresses. To make smoke particles more difficult to catalog, each fire produces different smoke variations from any other fire.

The problem is that smoke detectors can't perform a full chemical analysis; they can't determine the chemical makeup of smoke.

In a kitchen, for instance, smoke detectors have a difficult time detecting the difference between a grease fire and Cajun cooking. The percentages of the particulates may be slightly different, but the detectors just aren't able to tell the difference.