What is an RS485 Communication Network?

RS485 is a two wire data communication system where both wires are considered the carrier of the signals. As such, there is no ground/return. Two, three, four, up to dozens of devices can be connected to the same pair of RS485 wires. 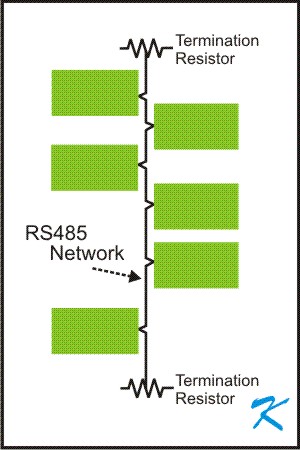 This is a block diagram showing the RS485 communication link between equipment. It is a 2 conductor link with a termination resistor at each end of the RS485 network.

RS485 is a two wire data communication system where both wires are considered the carrier of the signals. As such, there is no ground/return. Two, three, four, up to dozens of devices can be connected to the same pair of RS485 wires.

Because only one piece of equipment can transmit data at a time, the devices take turns sending. All the rest of the devices connected to the RS485 are receiving the data.

Both ends of the RS485 communication line is terminated by a resistor, often the resistor is chosen to be 100 ohms.

The reason for this resistor is because there is a conflict between fast data rates and the slow speed (by comparison) of the electricity in the wires (somewhat less than a foot in a Nano-second).

When, on the RS485 wires, there's high speed data rates combined with long travel distance for the signal to travel, by the time one data-bit has reached the end of the wire, the sending device could already be transmitting the next data-bit. Without the terminating resistor at the end of the wires to soak up the signal, the signal will bounce back along the wire and interfere with the newly transmitted data-bit.

T-taps cannot be used on an RS485 line because T-taps create spurs in the line which will bounce interfering signals back to the rest of the RS485 line. An extra terminating resistor on a T-tap to soak up the signal will become one too many resistors, so that can't be installed either.

The RS485 communications should be on a single pair of wires, connecting all the devices in a daisy-chain fashion. The daisy-chain should not have any t-taps and should be terminated at each end with a resistor.

RS485 communication systems can have many pieces of equipment connected between the terminating resistors. As long as there's no T-taps, this gives RS485 the flexibility to connect many devices into a fairly large network.

Any device can take its turn sending a signal, and all the other devices in either direction along the daisy-chain will receive the signal.

The signals on the wires are "differential mode" signals. Each of the two wires in RS485 is always opposite voltage compared to the other. This is also called "balanced", because like a playground teeter-totter, when one wire is positive the other wire is always negative.

As such, the labels + and - on the wire terminals do not indicate the voltage polarity, the labels indicate data polarity.

Due to the low impedance (resistance) of the terminating resistor, RS485 can go quite a distance - depending on the data rate of the signals being sent, up to thousands of feet.

RS485 is a medium distance wiring system. It is daisy-chained and terminated at both ends of the daisy-chain. It is balanced and carries data signals along the wires in either direction. It is time shared; only one device can be transmitting at a time.