Do I Have to Put The Fire Alarm System On Test? 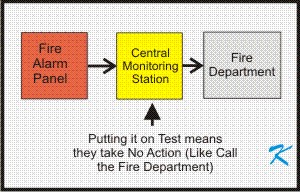 Putting a fire alarm system on test is the action of calling the central monitoring station and telling them not to call anyone when the fire alarm panel sends in signals.

It's the owner's fire alarm panel.

On the other hand, while you're there, if the fire alarm system calls the fire department, it's your problem.

Keep in mind the reason you're there in the first place is that the fire alarm system isn't running right. Often there's more than one problem and you really don't know what it's going to do.

When arriving on site, before touching reset, and if possible, before opening the cabinet, place the fire alarm system on test with the monitoring company.

With a normal panel, because of a bad smoke detector, pressing the reset button has activated alarms. Then there's a horror story about a service technician showing fire a alarm system to school custodians, and because of a loose connection in the panel, just opening the cabinet set off the alarm.

The trouble is, with the fire alarm system, you don't know what might be wrong.

Remember, when arriving on site to service a fire alarm panel, you are there because something is wrong and it's your job to fix it.

Until you can certify that the system is fully functioning, an alarm can come from nowhere to mess you up.