Why are there Two Fire Strobes in some Apartment Bedrooms? 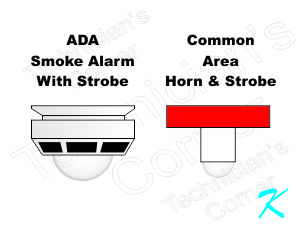 The common area fire alarm system horn and strobe in a handicap (ADA) apartment has to sound as loud and flash as brightly as the handicap (ADA) smoke alarm w/strobe. The two systems, though, aren't compatible with each other.

A fire alarm system, any fire alarm system, detects fire and warns people of fire. Greater requirements by the ADA (Americans with Disabilities Act) do not change the idea of detection or the idea of warning people; the detection is still there, and the warning is also there, but enhanced. The ADA's required warning enhancements, though, only mean more and higher intensity strobes along with louder and sometimes different sounding warning devices.

Whether it's a normal dwelling or a handicap (ADA) dwelling, the smoke alarms detect smoke in the dwelling unit.

Whether it's in a residence or in a hallway somewhere, if it's a real fire, the heat of the fire will open a sprinkler head so it sprays water. When this happens, water starts flowing and the common area fire alarm system warns everyone else in the building to get out.

Yes, relays can be installed so the building's common fire alarm system can be used to activate the strobes and sounders on the handicapped (ADA) unit's smoke alarms, but there are two issues that prevent that from normally being done.