What is an As-Built Plan?

Because a building sometimes can't quite be built exactly the way it was designed, As-Built plans show the exact way the building is constructed. 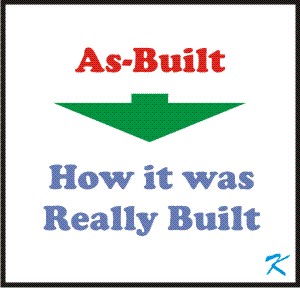 Before a shovel is put into the ground to dig the foundations, the building is planned.

The owner either has an architect in mind, or has several architects bidding on a general idea of the design. If there are multiple architects, each one conceives of a design.

This conception includes the overall design and shows a general cost of construction for that design. These plans are the original conception plans of the building.

Working with the architect, the engineer creates plans showing details of construction that make the building work.

The engineer specifies the overall structure, the materials that make up the walls, floors, ceilings, the location of electrical outlets, ventilation systems, communication systems, fire alarm systems, etc. Once the engineer is finished, the plans are ready for construction bidding.

Rather than being the final or finished blueprints, the plans become the basis for the contractor and sub-contractors to submit their bids.

These plans are the Bid Plans of the project.

To show what is going to be done to make it work, the contractor and sub-contractors make changes to the bid plans, then submit the changed plans, along with the cost of construction, back to the engineers.

These plans are the Submittal Plans for the project.

Once the contractor's bid is accepted by the architect and owner, construction can begin.

The owner will want blueprints showing how the building is constructed. The problem is what was planned never is exactly what was done. In other words, even the submittal plans don't really show what was done.

For the contractor or sub-contractor to make it work:
The architect and engineer can't visualize every detail, and once construction is started, often the owner makes changes. To show the details of how a building is constructed, it's up to the contractor and sub-contractors to correct the plans showing what was actually done.

The person on site in charge of construction or installing the system makes corrections to the submittal drawing to create the As-Built drawings.

This is the basis for the final drawings As it was finally constructed or Built, showing:


For each building project, the planning and construction process is different, but this outline shows a general idea.