Why Have Wire that Lasts 2 Hours in a Fire?

A large building, or especially a tall building can't be evacuated in just five minutes. If some people can't leave a building for nearly an hour, the wire, and its insulation has to last at least that long, even when the fire is all around the wire. 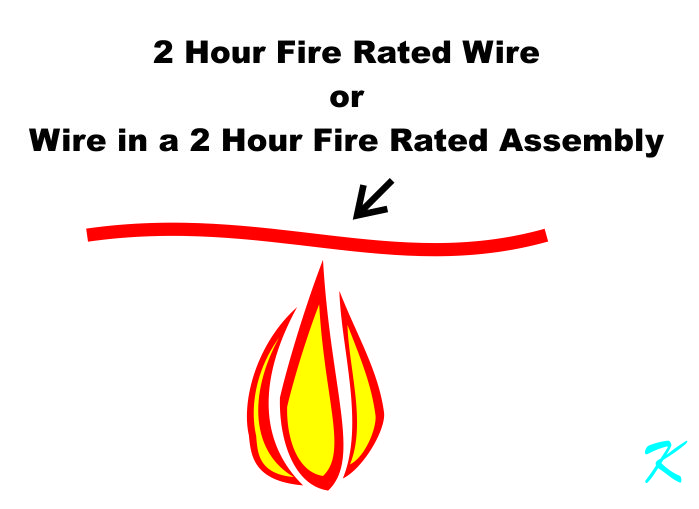 To get out of a tall building, when there's a fire, people use the stairs.

Stairs, though, are tall, narrow, people conduits. They may be the escape route, but they're also a choke point; at any one time to get out of the building, not many people can use the stairs. Once the stairs are full, even if there's a fire right behind them, just to get into the stairwell, some people trying to escape the fire have to wait their turn.

This is staged or partial evacuation. It's is done by making the announcement about the fire only to the fire zone and adjacent zones. Usually, in a tall building, the zones are the Floor of Incident (where the fire is located), the Floor Above, and the Floor Below.

The NFPA 72 talks about the fire alarm notification wiring used for partial evacuation of a building. Even when a fire is attacking the wire, so the wire will still carry the evacuation notice, the NFPA 72 says that this wiring will be rated to last 2 hours.

In essence, while there's still a chance that people are in the building needing to hear the evacuation announcement, the wiring carrying the announcement, even through a raging fire, will remain intact.

In other words, the wire itself has to be protected for 2 hours.

With that 2 hour rating, when it's time to evacuate the upper floors, even though a raging fire, those people on the higher floors will still get the evacuation message.