Help! I Have Some Weird NAC Troubles 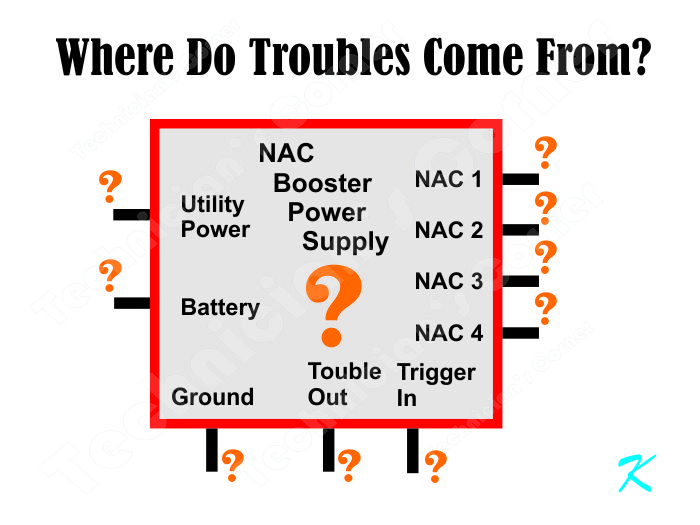 A booster panel feeding unit strobes in a condo building will go into trouble only at night. The troubles occur between the hours of about 1am to 6am and then never have an issue at any other time of day. The booster clicks in and out of trouble very quickly while this is happening.

Metering the circuit has not shown anything that looks wrong.

Any ideas on what to look for?

You have what I refer to as a "Weird Trouble". Weird troubles are troubles that are not obvious and require thinking. Let me know if any of the following helps. Maybe I can help further.

Second, keep an open mind. Everything has to be suspect until proven to be not a problem.

You have:
Each of these could be a problem, or a conductor of interference into the panel.

The following is based on troubles that I have encountered over almost 20 years of fire alarm work, which is included in 45 years of electronic maintenance.

Of course, you know that to be absolutely sure the problem is not the panel, disconnect all wires to the panel and run the panel on batteries. This removes the possibility that interfering signals are coming in on the utility power, or any other wire.

There could be something wrong with the panel itself. The trouble by itself doesn't show up as a trouble, but when combined with some other problem at the wee hours of the night, shows up as the repeated trouble.

Utility Power Coming Into the Panel

The utility power is always a little greater at night than during the day. The power company may say it is rock stable, but as a broadcast engineer I've spent years logging the exact voltage, I know the voltage varies. As the power usage changes from day to night, voltage drop in the power lines will change. When the voltage goes up at night, the repeated troubles might start. But then again, I've seen trouble on a panel because the voltage goes down in the evening during the summer because of heavy air conditioner use in the neighborhood.

If the ground for the utility power coming into the panel is only conduit ground, remember that the conduit ground is a safety ground and not a signal ground. As the system ages, tarnish builds up on the conduit connections and the low voltage signals get interfered with. I've seen that problem show up only at night when the utility voltage is higher.

The batteries could be failing, and if the power fluctuates enough during the night, the panel could be having troubles.

An interfering signal could be coming into the panel through the ground fault circuitry. If all else fails to find the trouble, disconnect the ground fault input to the panel before deciding that the problem is the panel. MAKE SURE YOU RECONNECT THE GROUND FAULT DETECTION CIRCUIT AFTER TESTING IT.

An interfering electrical signal could be coming in on the trip wires for the booster panel.

High enough frequency interfering electrical signals have been known to capacitively couple past relay contacts. Even suspect this as a source of the trouble until you prove that it isn't.

Signal could be riding in on the NAC wires, and just one, two, or three of them aren't quite enough to cause your repeated troubles on your booster panel. Disconnecting any one of them could stop the trouble, but when the fourth one is reconnected, the trouble starts again.

If any of the four stops the repeated trouble, then the interfering electrical noise could be coming in on all of them. It's just that all four have to be connected for the trouble to show up.

Even the aux power output wires could be carrying the interfering signals into the booster panel.

In most cases, if it's not a circuit trouble on the circuit board itself, the cause of the repeated trouble is outside interference coming into the panel.

Do the easy and fast troubleshooting first. Perhaps you'll find the problem. If the troubleshooting is going nowhere, try something different. Remember, as you're doing the easy troubleshooting, you will also be learning more about the system, and as you progress to harder techniques, you'll be building on what you've learned.

The biggest part of all this is duplicating the trouble. Be able to reproduce the trouble and you'll be better able to follow the trouble to its cause or causes.

The interfering electrical noise could be anything from 50 or 60 HZ all the way up to 100 MHz. I've seen where both radio and TV stations get in there. In one case, an AM radio station transmitter was a couple of miles away, and did not cause a problem until one fall when there was an exceptional amount of rain, which reduced the resistance to the radio signal in nearby swamps. It actually was a simple fix, but I had to use an oscilloscope in order to verify that there was radio signal interference on the Notification Appliance Circuits (NAC).

Look for any commercial radio or TV tower within 3 miles of the Condo. Find out what station it is and contact the chief engineer. Find out if the station is doing anything different during those hours. Keep in mind that the radio or TV station is under no obligation to change how they're doing anything; if there is interference from the radio or TV station, it's really your problem. However, if the trouble is coming from their station, most chief engineers are willing to give you counseling to help you clear up your troubles.

Radio and TV stations do their testing in the wee hours of the morning; hours when they will interfere with the lest number of people listening to the station.

When troubleshooting, don't assume that the trouble is really coming from the circuit that gets disconnected. For instance, if the trouble stops when disconnecting both wires of NAC 1, check the panel by disconnecting all of the others, and then reconnect NAC 1. You might be surprised by the result. It could be that the problems accumulate and it takes all 4 circuits connected before the problem becomes apparent.

When troubleshooting, before doing anything, take lots of pictures so the wires can be replaced exactly where they came from.