Can a Waterflow Switch and a Tamper Switch be on the Same Zone? 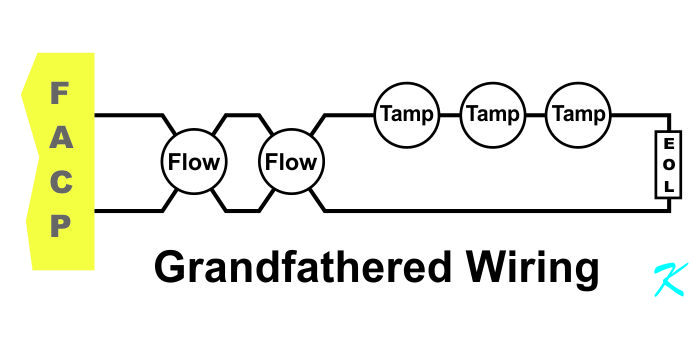 Somehow...somewhere I recall I read an article that said that the Waterflow Switch and Tamper Switch shall not be connected in the same IDC (Conventional Initiating Device Circuit) because one can activate the other?

I've been looking, back and forth NFPA 72 with no success...

My question...is this a design decision, or actually is this addressed in NFPA 72?

If you've inspected conventional fire alarm systems in older buildings, you may have run into a few of these.

The wiring issue is only indirectly addressed in the NFPA. The National Fire Protection Association (NFPA) is no longer in the business of specifying how to wire much of anything (wires don't detect fires or warn anyone); the NFPA is in the business of showing what is needed to:
The NFPA also wants the building-wide fire alarm system to have internal checks so the system can be fixed in a timely manner; if there's an internal problem found with the fire alarm system, the panel should show a trouble.

Red Light Alarm - If the fire alarm system has detected a fire, the action that the system tells everyone to take is "immediately take action to protect yourself" because there is a dangerous situation.

In the olden days (before the 1960's) there was no such thing as a supervisory signal. In order to detect a closed valve, the tamper switch would "break" the wire going to the waterflow switch's end of line resistor. This tamper switch action causes a "trouble" for the fire alarm system.

See "Why Does Closing Some Gatevalves Show Trouble?"

The left-hand part of the diagram shows the grandfathered - old - method of wiring a tamper switch. The old method only showed that the fire alarm system needed to be fixed. What is meant by "grandfathered" is that at one time this wiring was about the way to wire a tamper switch. If it was installed at the time it was acceptable, the fire marshal will probably put up with it . . . for now.

The NFPA 72 shows what is needed for several different types of fire alarm systems. Remember, though, that to protect from fire, the NFPA has published hundreds of Codes Books that have to be followed. For instance, in a particular occupancy the NFPA 101 shows what kind of fire alarm system should be used. Other codes published by the NFPA include requirements for manufacturers, testing laboratories, sprinkler systems, fire marshals, elevators, electrical systems, and the list goes on and on.

Many of the requirements that we adhere to are in the NFPA Codes other than what can be seen in the NFPA 72; if some requirement isn't being addressed in NFPA 72, it is probably shown directly or indirectly in another code.


See Is it Even Legal to Show a Trouble for a Closed Valve? for background information on the old style of tamper switch wiring.