How Do I Test Beam Detectors? 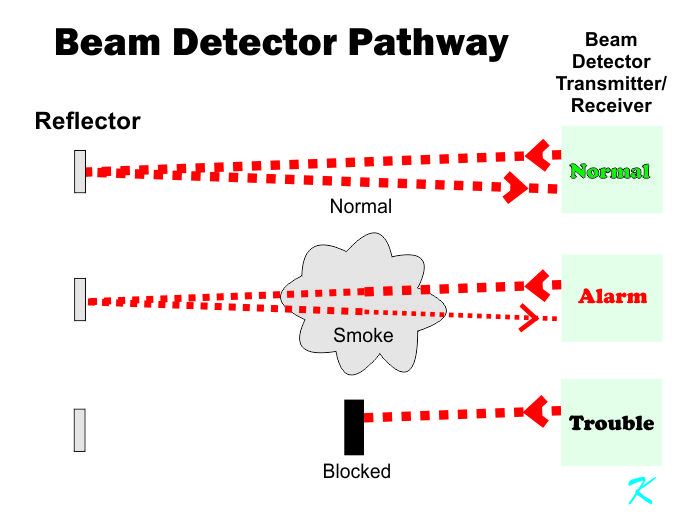 We are testing some beam detectors. They're transmitter/reflector/receiver types placed more than 8 meters above ground level.

When I try to test, they're not going into alarm, but control panel is receiving beam obstruction troubles. After some time, they go into alarm. We tested with plastic card-board to obstruct the beam path.

A beam detector goes into alarm when a room is just starting to fill up with smoke. In the early stages of a fire, the smoke only blocks the light beam a little bit; it allows most of the light to pass to the reflector and back. Once the light beam is totally blocked by the smoke, a fire has gotten out of control.

On the other hand, false alarms are not appreciated by anyone. A janitor bumping a beam detector and misaligning it, or else a pole or other cleaning device getting in the way of the light beam shouldn't sound the alarm; things that essentially block the beam should only send a trouble on to the fire alarm control panel.

If the beam is just blocked, you won't get an alarm. Something that only passes most of the beam-of-light is needed to sound the alarm, like a semitransparent sheet of plastic. Using the plastic sheet, however, only tells you if the detector can go into alarm. The plastic sheet doesn't show if it goes into alarm when the correct amount of smoke is present.

Often, just taping the test sheet to the end of a long pole, like a flag, allows testing without tall ladders.