Is There a Code Saying the NAC Can't be in Conduit with the SLC? 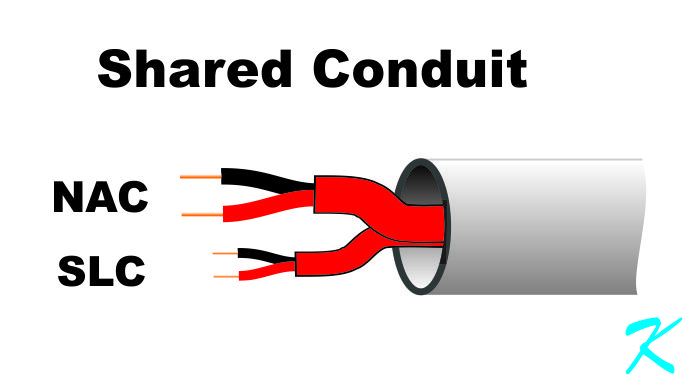 I found your name attached to a lot of very useful advice and information on FA circuit design. I have a question that hopefully is easy to answer.

I have a renovation project where we are extending an NAC (Notification Appliance Circuit) and SLC circuit (Signaling Line Circuit) to a new fire alarm panel. The specifications are for Class B circuits.

The contractor wants to run the NAC and SLC circuit in the same conduit distance is about 13 feet (or 4 meters). Is this allowable? Or must the two circuits be in different conduits?

I looked in NFPA 2016 Chapter 12 and found nothing prohibiting running them together. However, my colleague said it is not permissible (over 10 feet) but he didn't tell me what reference in the code dictates this. What am I missing?

Or given the short distance, it's ok?

To find out if two devices are compatible with each other (they have been tested together and are shown in the test results as working together - reliably), tests have to be performed by a third-party, nationally known testing laboratory like UL, ULC, FM, CE, etc. Testing laboratories, though, have limits; they can only test what the manufacturer designs.

Manufacturers often specify what kind wires should be used for the SLC and for the NAC. If they know about an issue, they would be the best resource to finding out what can and can't be done. However, they also have limitations to what they know about; they don't know about your exact wiring layout. You might want to check with their technical support, anyway, to make sure they don't know of an issue.

If you've checked with the manufacturer (who doesn't know exactly how you've run the circuits), if the design is not in violation of what the third-party testing laboratories say, and the NFPA doesn't directly specify that the circuit layout is bad, then it's up to whether or not there's an electronic problem.

Is There a Technical Issue? - Crosstalk

Crosstalk is transformer action, and as such, crosstalk only occurs when there is varying (AC) current through a wire. The varying current generates a varying magnetic field. The varying magnetic field induces varying power into the other wires. The greater the distance the circuits are together; the more crosstalk. The more AC current in the transmitting wire; the more crosstalk.

Crosstalk is where you have one circuit, using transformer action, transferring power and signals to the other circuit. Either circuit can transmit to the other and can have immediate consequences, have delayed consequences, or even consequences that only occur under very strict circumstances. There isn't much of a difference between an official transformer, that has wires wrapped around an iron core, and an iron pipe enclosing some wires. It may not be as efficient as an official transformer, but the wires and conduit still make up a transformer.

Usually, as long as the current types in all circuits are the same, there is no noticeable crosstalk. However, when mixing high current wires (like a NAC for the horns and strobes) and low current wires (like an SLC), there is a small possibility of the NAC interfering with the SLC. Remember that there's AC synchronizing signals riding on the DC of the NAC, and the AC synchronizing signals have a slim possibility of interfering with the SLC. If there's no code, testing, or manufacturing issues with combining the NAC with the SLC, use the good wiring practice of keeping the wires out of the same conduit as much as possible.