How do I Find this NAC Trouble?

The NAC is a Notification Appliance Circuit for the Horns and Strobes. If a wire is broken, or come loose from one of the horns or strobes, the NAC circuit is in trouble. To fix the you have to find the broken connection somewhere in the building. 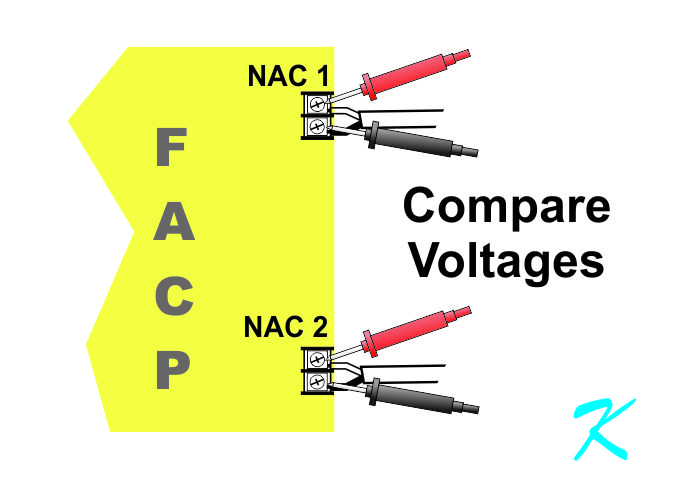 I am currently trying to figure out where an open is occurring due to this trouble message on my FACP (Fire Alarm Control Panel).

The booster card LED shows that NAC2 is the trouble and when I put a resistor across it, it clears the trouble. When I switch NAC1 and NAC2 the trouble moves with the wiring.

The problem is that I don't know how the circuits were run in this large building that has had many additions and I can't duplicate this intermittent trouble when in the field. There is only one fire alarm panel in the building and the booster is in the same panel. Also, no zone lights up on the panel to help narrow it down.

I have opened multiple bell/strobe circuits and they always display the zone and the error message always mentions it's a bell. Not sure where to start looking, any help would be great.

Have you got a voltmeter? If not, go to Home Depot or someplace like that and buy a cheap digital voltmeter. Expensive isn't needed, a voltmeter of some sorts is all you need. (The one I use is a cheap one from Home Depot.) The panel is looking at voltage on the NAC circuits; you need the meter to see the voltage that the panel is seeing.

When there's no fire alarm on the NAC circuit, there are three voltages possible: Normal, Shorted, Open. These are relative voltages and the only way of telling if the voltage is correct is to compare the NAC 2 voltage to the NAC 1 voltage.

Not In Alarm NAC Voltage

Normal Voltage - When everything is normal (if there's a Booster Card Green LED, it will be lit, and no other LED will be lit), both NAC 1 and NAC 2 are roughly the same, or at least similar voltage. This is the normal voltage.

Shorted - With a short on the wires somewhere in the building (the Booster Card LED will be saying something like "NAC 2 Short" or "NAC 2 Trouble" or it will be lit), on the voltmeter, NAC 1 will be showing the normal voltage and NAC 2 will be showing much lower voltage, possibly zero volts.

Open - With an open, (the Booster Card LED will be saying something like "NAC 2 Open"), NAC 1 will be showing normal voltage and NAC 2 will be showing a higher voltage, possibly several volts higher than NAC 1.

Checking these voltages with the meter will show you what is happening to the wires.

Normal Continuity - the panel is running a small current through one of the wires, all the way to the end of the circuit somewhere in the building, through a small resistor called an "end of line resistor" (because it's at the end of the circuit), and then back to the panel on the other wire. This is telling the panel that all horns and strobes are connected. That way, if there's a fire alarm, all the horns and strobes can receive the needed power to warn everyone.

Wires Shorted - If there's a short on the wires, the voltage on the circuit is pulled down to zero. The panel knows that there's a short trouble and something needs to be fixed. A short, by the way, is so bad that, if there's a fire, the panel won't even turn on that NAC circuit. If the panel ever says "Shorted NAC", fix that short right away.

Wires Open - If there's a broken wire, if a wire has come loose from a connection, if the trouble switch inside the circuit board of the booster power supply is open, this continuity checking (supervising) current coming out of the fire alarm panel is interrupted. When the current is interrupted, the voltage you measured on the NAC terminals of the fire alarm panel goes higher.

That is just one possibility for the "Open NAC 2" trouble on the fire alarm panel.

Open the door to the Booster Power Supply. The only light in there should be the "Green - Everything is Normal Here" light. If there's any other light turned on, check that out. That will tell you where to go next.

Be careful, putting in the batteries wrong will burn out the Booster Power Supply. Also, these batteries can start a small car; they don't have much voltage, but they have lots of current.

NEVER replace the batteries one at a time; ALWAYS replace them in pairs. If one of them measures bad and the other measures good, replace both of them. The batteries have to be matched, and not of different ages, or something else may go wrong.

One other thing about the batteries: date them. Use a piece of masking tape for a label and mark today's date on the batteries so anyone can tell when they were installed in the BPS. They do go bad, and they should be replaced no later than 4 years from the date of installation.

Find the Circuit in the Building

This part will annoy everyone that's in the building, and if you don't take precautions, will annoy the fire department when they arrive because of a false alarm.

Also, use your voltmeter, check to make sure there's voltage. Don't change polarity on the bells and strobes. It's supposed to be wrong when there's no alarm, and then change to correct polarity when there is an alarm.

Building Occupants - Either perform tests when no one else is in the building, or make sure EVERYONE knows that you're testing the system.

Firefighters - Call your fire alarm monitoring company and tell them not to take any action while you're testing, or the firefighters will come. Also, you can even call the fire department on their non-emergency phone number and let them know that you're testing.

Perform a Fire Drill - Check all of the bells and strobes to make sure they are sounding off. If any aren't sounding off, start checking them.

If all of the bells and strobes work properly, proceed to the next steps.