How Do I Connect Two Fire Alarm Panels Together?

There are three major issues - All alarm, supervisory, and troubles have to be shown on the master panel, both panels have to be able to sound the alarms throughout the building, and there has to be a means of resetting both panels. 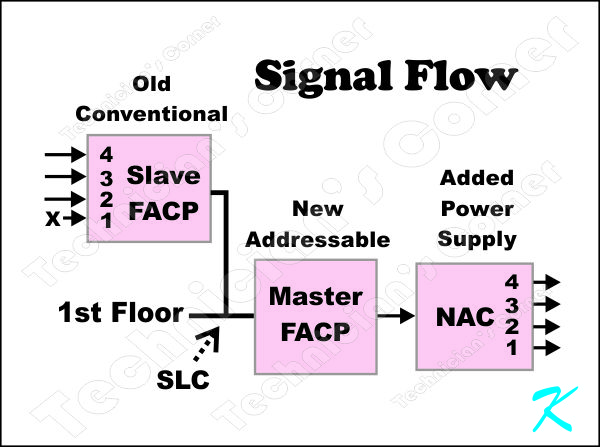 Investigating the cause of a fire alarm has to be done while the fire alarm control panels are in alarm. Using two panels as master / slave prevents the two from being stuck in an alarm feedback loop.

I have a project, School Building, the scope of work is to renovate only the ground floor. The building is composed of a total of 4 floors. The Existing Fire Alarm Control Panel is conventional and is to remain and reused for the rest of the floors.

What types of modules need to be installed so both panels can communicate with each other?

Whether it is one addressable and one conventional panel, or two panels of any sort, there is one issue that has to be dealt with before anything else is taken care of. The issue is that someone untrained is going to reset the system when there is a false alarm. This is a given, and this is the problem that has to be addressed when using two panels to cover the same building.

Bottom Line - Later training doesn't usually happen, so operating the system has to be intuitive.

When a fire is detected, any fire alarm system for a building has to latch into alarm and stay in alarm until it is manually reset. That way the cause of the alarm can be investigated while the system is in alarm.

What we have, if the two panels are stand-alone panels, is a "feedback loop." If panel 1 is in alarm, it sets off the alarms in panel 2, which sends an alarm to panel 1. Resetting the panels has to be timed so both panels will go out of alarm at the same time. Especially if the people operating the system haven't had proper training, that reset procedure is difficult to understand. In the middle of the night, if it's firefighters trying to reset the panel, they will have to call you.

A method of making the reset intuitive is to make one panel the master panel and the other panel the slave panel.

What I Would Do

Because the conventional panel is being reduced as each floor of the school is remodeled, the addressable panel should be designated as the master panel. That is also the panel that will be monitored by the outside monitoring company.

Resetting with a Master and Slave Panel

At this point, without much training, the person trying to reset the fire alarm system will reset the slave panel and try resetting the master panel again.

Then the system will reset properly.


I know that this is not really the answer you're looking for, but I'd have to be on site and see the current system and the new system to get an idea as to what is exactly needed between the two systems.

Install the Two Panels Next to Each Other

By the way, to reduce confusion in whoever gets to silence and reset the system, make sure the two panels - the conventional panel and the addressable panel - are within easy reach of each other.