What is the Difference Between Class A and Class B NAC Circuits? 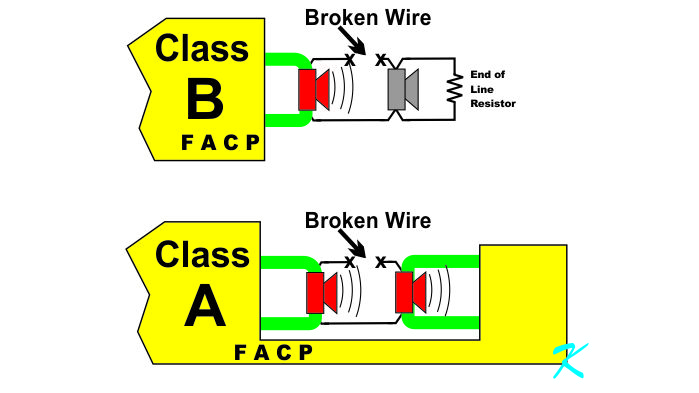 How can I determine the difference between class "A" or class "B" NAC circuit?

In fire alarm systems, the real difference between Class B and Class A is that if the pathway is interrupted, Class B only sends a "Failure Signal" to the panel, and Class A provides an extra path to get around the interruption.

First, though, for the purpose of understanding a Notification Appliance Circuit (NAC - the circuit that provides the electricity to the horns and strobes), there has to be a power supply that can push and pull the electrons through the wire. The power supply is the Fire Alarm Control Panel (FACP).

The pathway that the electrons flow through is from one connector on the FACP and going into one wire. One at a time, the wire goes past each horn and strobe (appliances), giving each one some electrons. This turns on the appliances. To make room for more electrons, the appliances push out the electrons into the other wire, and that wire carries the electrons back to the FACP.

In essence, for all of the horns and strobes to give their life-safety warnings, all of them have to be connected to a complete circuit.

With Class B, the horns and strobes are wired in a line, like beads on a single string necklace. For Class B, just like holding one end of the necklace, one end of the circuit is connected to the panel. Like the dangling necklace, the other end of the circuit goes to an end of line resistor, somewhere else in the building. If a wire breaks in the middle of the circuit, like using a scissors to cut the string on the necklace so half of the string falls to the floor, the horns and strobes still connected to the panel can warn people, but the notification appliances that are no longer connected aren't able to give out their life-saving warning.

Class B and Class A Trouble

Of course, the panel shows a trouble that needs fixing if either Class B circuits or Class A circuits have a broken wire. The difference is that for a Class A circuit, if a fire breaks out before the wire is fixed, all of the horns and strobes can still provide their life-saving warning. For a Class B circuit, however, some of the appliances won't work if a fire breaks out before a broken wire is fixed.

Wire Totals in the Panel for Class B and Class A

Class B Notification Appliance Circuits (NAC) have 2 wires leaving the panel to power the horns and strobes. The wires end somewhere else in the building. (2 wires total)

Class A has an extra life-saving feature. After connecting to all the horns and strobes, Class A NAC circuits have those same 2 wires coming back to the panel for a second (redundant) wire path. (4 wires total)

What is Conventional Class B Wiring?

How Does Conventional Class A Fire Alarm Wiring Work?

What's the Difference Between Conventional Class A and Class B?