Do I Have to Use Pull Station Glass Rods in a Daycare?

In most cases, glass rods in put stations aren't needed to keep the pull station in the ready condition (normal condition). If the fire marshal is OK with no glass rod, leaving out the glass rod in a Childcare setting prevents a broken rod from becoming a choking hazard for the children. 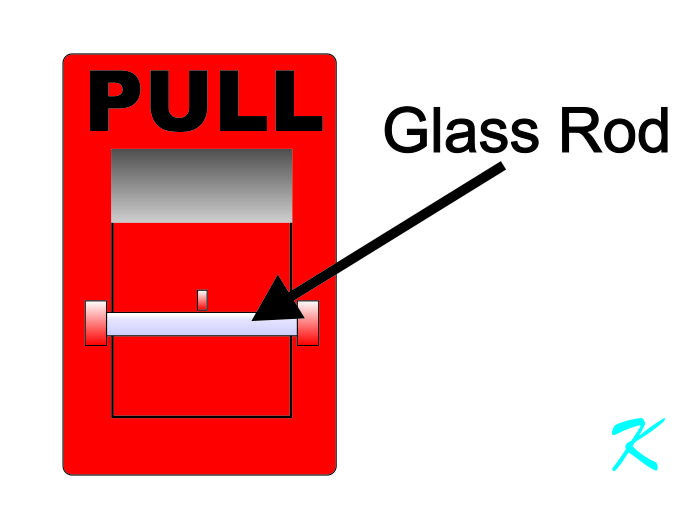 Would you happen to know:

What is glass rod for fire alarm pull stations are made of? I can only find material listed as HAWA [A type of Plastic].

I have fire alarm pull stations that were installed in the 1980's. Back then the glass rod was made of real glass and the fire marshal had me remove the glass rods due to being unsafe in a day care center. If a child pulled the station and the glass broke, it could get in their eyes.

I recently had a pull station replaced and I noticed the glass rod feels more like a hard plastic and is scored in the center of the rod. It appears that it would break evenly at the score and would not shatter.

You bring up an interesting question. These days, the rods are often made of a ridged plastic material, although I wouldn't know exactly what plastic is used. They're designed to break where you indicated, but whether or not they are toxic, I don't know.

The biggest reason for the glass rods nowadays is to give people "pause" before just pulling the alarm; it makes them think about it.

In a daycare setting, yes, given the right circumstance (including the child being able to reach the pull station) the breaking glass could injure a child. But there's another possible problem with young children in a daycare center.

Choking Hazard in a Daycare Center

My wife is in a daycare center. She has commented about toys having to be at least certain sizes for very young children. That is so that small parts won't be swallowed or choked on. The rules she has to live by go so far as to require that even the grapes for young children, served at lunch time, have to be halved or quartered to prevent choking.

That could happen in a daycare setting. If the glass rod or plastic rod accidently broke, it might not be noticed right away. The broken pieces of rods would sit on the floor until they were vacuumed up. Personally, I wouldn't count on the vacuum cleaner finding the broken pieces before a crawling child got there to put the pieces in the mouth.

If the fire marshal is fine with no glass (or plastic) rods in the pull stations, I, personally, wouldn't put them in because of the choking hazard.

You & your wife are both correct about the hazards. I requested some information, but you have answered all I needed to know. I removed the rod out of the new pull station and it works fine without it, just as the others do. If anyone has any concerns, I will present the hazards the rod creates in a childcare center, including the additional choking hazard your wife has brought to my attention.

I would like to thank you both for your excellent input and your willingness to respond to me.