How do You Use the Switches for Addressing?

Like street addresses, and whether the address switches are thumbwheels, binary switches, or programmed using software, the numbers represent a unique address for each device.

Can you tell me how the switches work when addressing addressable fire alarm devices?

I'm assuming you are referring to the little switches used for addressing purposes on the detectors and modules.

For the fire alarm system, the numbers on the switches on the detectors and modules represent a number used in identification (addressing). This is similar to a phone number.

When thumbwheels are used for addressing, the decimal thumbwheels use the numbers 00 through 99. Each of the two wheels has the numerical position 0 through 9.

(It's obvious, but stay with me anyway.) In decimal, the numbers 0 through 9 mean:

(Be Patient, I'll get to it.) Decimal thumbwheels are easy for us as humans to understand; What-You-See-Is-What-You-Get (Wysiwyg).

The module or detector then converts this digital number 43 to the binary number 00101011.

Ya, it sounds simple, but I'm still getting to it. 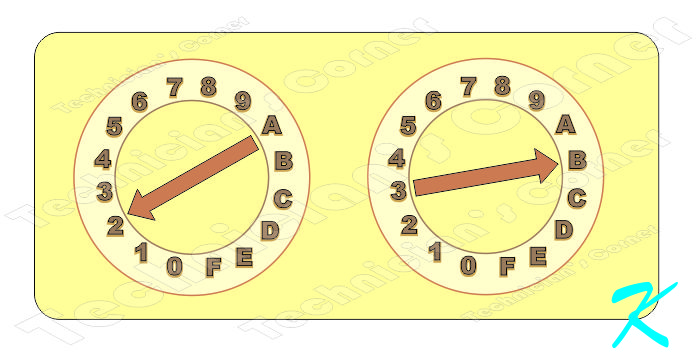 The module or detector then converts this digital number 2B to the binary number 00101011. Notice that this is the same binary number as came from the decimal 0 through 9 thumbwheels shown above.

To get the true number 43, you add the numbers represented by the switches:

You add the numbers represented by the turned-on switches and get a true total of 43.


Yes, I know. There isn't really a "True" number. In this case I'm calling numbers "True" when using numbers that we all have grown up using, which are the numbers 0 through 9: Base 10, or Decimal.
Douglas Krantz
Check It Out
Check It Out