Why am I Seeing a Bell Open Circuit?

I just wondered why the FACP [Fire Alarm Control Panel] always indicates a Bell Open Circuit even though the connections are correct, and the bell is good. What might be the reason?

To understand what's going on, first we have to look at what a fire alarm system does.

A fire alarm system detects fire, and when a fire is detected, it warns people.

To do the warning, there are devices that sound the alarm, like fire bells, horns or speakers, and devices that flash, like strobes.

Between the detection devices and warning devices, there is a lot of wiring and a Fire Alarm Control Panel.

If the current stops, like if a wire comes loose from a device or a wire breaks somewhere, the panel, sensing that the current has stopped, says "Trouble - Open". The panel is saying that the wiring has come loose somewhere; there is an opening in the wire.

The panel can't tell anyone where the opening in the wire is located, just that there is an opening, and there is a good chance that a warning device or a detection device is not connected.

An important part of this supervision is the end of line resistor. To check continuity, the electricity has to go through a "closed" loop - it come out of one of the zone terminals on the Fire Alarm Control Panel (FACP), through all of the wires on one side of the loop, through the end of line resistor, back through the wires on the other side of the loop, and back into the other zone terminal of the FACP.

As long as the FACP (Fire Alarm Control Panel) can detect that the current is flowing, the FACP assumes that all the devices are connected. But if the current stops flowing in the wires or the end of line resistor, for any reason, the FACP considers the wiring has an open in it somewhere, and says "OPEN". 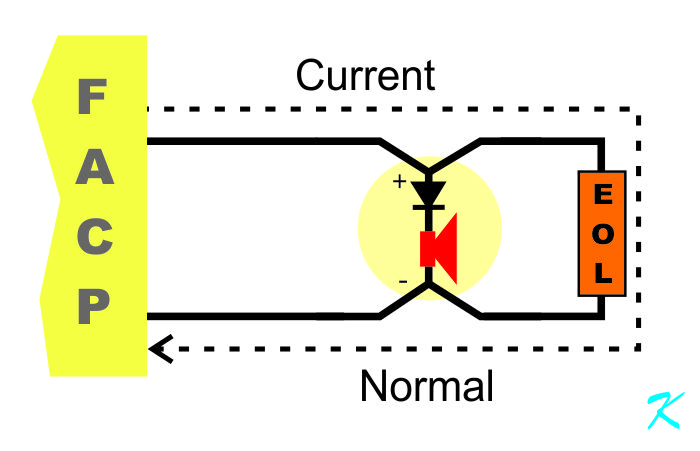 Where to Go From Here

I've included a diagram showing how a Class B circuit is supposed to be wired. Most Notification Appliance Circuits (NAC) are wired as Class B Conventional circuits.

Use your voltmeter. Make sure that the voltage that you see on the NAC terminals of the FACP is the same voltage that in at each horn or strobe, or the end of line resistor.

If there's voltage at the NAC terminals but there's no voltage on a fire horn or strobe, or on the end of line resistor, there's an open in the wiring between where you're at and the FACP. Find the opening and fix it.

If there's voltage at a horn or strobe, or even at the end of line resistor, but the voltage is higher or lower than the NAC terminal, that means that you're looking at the wrong NAC circuit. You need to check somewhere else. (When I don't know where the wires run in a building, I check voltages just that as a way to confirm that I'm looking in the right place.)

The reason that the panel is saying Bell Open Circuit is that the FACP is not able to run electrical current though all the wires and the end of line resistor. This means that the FACP may not be able to sound the alarm everywhere in the building, and the "open" in the wiring needs to be fixed.