Why Doesn't My Smoke Alarm Set Off The Building Alarms?

Usually, the apartment's smoke alarms aren't even connected to the building's fire alarm system. The reason they aren't connected is to prevent everyone in the building from evacuating just because someone else burnt their toast. 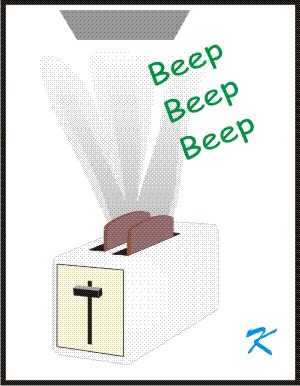 Smoke from overcooked bacon, fried chicken, blackened white fish, burnt toast have all set off smoke alarms. To people in other apartments, this is a false alarm.

Often it's called "burnt toast", but whether it's overcooked bacon or food left in the microwave oven too long, the smoke is still cooking smoke. The thing is when the smoke alarm sounds off from cooking smoke, it isn't a real fire.

It's just that there's enough burnt toast smoke to set off the smoke alarm.

When they're cooking, sometimes people burn their toast.

Everyone Hears the Common Area Alarms

These systems sound off because the escape route through the halls is starting to fill with smoke. Everyone hears these alarms.

When the common area alarms sound off, everyone should stop what they're doing and get out of the building. They should get out right away before the halls finish filling with smoke.

Bur for everyone else, the alarm isn't real. All the other people in the building shouldn't have to stop what they're doing and get out just because someone is cooking.

In the apartment building, for the burnt toast alarms to become a regular occurrence, each apartment only needs one cooking smoke alarm per year. If everyone has to hear this type of alarm over and over again during the year, it becomes annoying for everyone.

After a while, people don't stop what they're doing and don't leave the building anymore. If the alarm from a real fire sounds like someone is cooking, no one is even thinking of leaving until they smell the smoke. This is bad, because with a real fire, everyone needs to get out.

The problem is that by the time anyone can smell the smoke, the smoke has filled the halls. When the halls are full of smoke, there's too much smoke there to escape.

To prevent cooking smoke from being false alarms for everyone, the apartment smoke alarms aren't connected to the common area fire alarm system. This way everyone doesn't have to react to someone else's cooking smoke.
Check It Out
Check It Out