An Alarm Chirps -- Which Alarm Is It?

Often, the smoke alarm is sounding a low-batterychirp every :30 seconds or so, but the chirp could also be coming from the Carbon Monoxide Detector or Furnace Alarm. The only way to tell is to put your ear next to it and listen for the chirp. 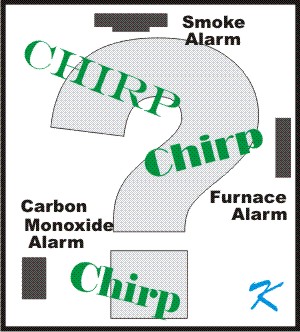 The smoke alarm, furnace alarm, or carbon monoxide alarm alarm is chirping every 30 seconds or so, but it's hard to tell which direction the sound is coming from. Which alarm is it?

In the home or apartment, there's a loud chirping, almost like a bird, but it's electronic. Coming from somewhere, every 30 seconds to 3 minutes there's a short "chirp", but where the chirp comes from there's really no way to tell. It could be coming from a smoke alarm on the ceiling, but sometimes it comes from somewhere else.

You're not alone with this confusion. Just by listening in the center of the room, I don't know of anyone who can tell where the chirps are coming from.

Causes of the Annoying Chirp

Pay Attention to Me

Usually, a very short chirp doesn't mean there's a fire or the air is full of carbon monoxide. The short intermittent tweeting often means that an alarm needs attention. Something's wrong with the alarm: the battery in the smoke detector needs replacement, the carbon monoxide detector is out of date (they only last for 7 to 10 years, and after that they will not work), or the furnace alarm is faulty.

Your job, as homeowner, caretaker, or building maintenance person, is to find out which device is actually chirping, and then replace the battery or the faulty alarm device.

Finding out what is chirping is sometimes harder to do than it seems; no one can tell the direction that the sound is actually coming from.

The only way of finding out where that short chirp is coming from is to make a guess --- then confirm.

Once you've made a guess, put your ear within inches of the device. If you have to, climb on step stool to get close, and listen for the chirp.

If you've guessed correctly, the sound of the chirp will be much louder. If it isn't louder, start looking somewhere else for the device that's chirping.

It's there somewhere and it's chirping, you just have to find it. The alarm could be anywhere. In an outlet near the floor and behind the couch, there could be a plug-in carbon monoxide alarm. It's been there for years and now it needs to be replaced.

Or, maybe close to where the smoke detector is in the ceiling, the furnace alarm is trying to get your attention. Put your ear next to one of these and listen.

Eventually, just by guessing and then confirming, the chirping device will be found.

Compared to the cost of the alarm device, batteries are cheap --- replace the battery first.

If after replacing the battery, the alarm continues chirping, replace the alarm.

The alarm making the chirping sound could be anywhere. If by getting close and listening, you can find the alarm that needs attention, you can save the cost of having a professional come in and do the listening for you.