I came across your website while researching information on fire alarm systems and EMI/RF filters. I was looking to see if there is an EMI/RF filter that would work on NOTFIER Signaling Line Circuits [SLC] or Notification Appliance Circuits [NAC].

Seeing that you have over 40 years in the electronics including the fire alarm industries for more than 20 years, I was curious if you have had any experience using EMI/RF filters on fire alarm systems.

I do not have much experience with electrical or fire alarm systems, which is the reason I started reading your website. I was digging for information to understand how everything works.

I will say that we have reached out to NOTIFIER for on this topic, and they have responded that they DO NOT recommend using filters on those circuits, as the filters will adversely impact communications on those circuits.

I assume this is their position because they have not tested their wired circuits with external RF filters and cannot recommend their usage. However, this does mean an external RF filter would not work? Have you come across this in your 40 years of experience? Please advise. Any information will be greatly appreciated.

It sounds like you do have a problem. I'm not sure what the problem is, but this is what I do know about filtering.

Example: Yes, I have found and fixed some interference problems where close-by AM radio stations interfere with the internal electronics of some fire alarm modules. In most of the places, "Air-Gap Filters" were used; a removeable metal bracket was removed from the module so there was air space between the module and the insides of the junction box; an air-gap was inserted between the interfering signal and the module. The manufacturer has since redesigned the mounting for the modules so the removable bracket is not included.

The conduit itself was part of the problem. Any conductor, including conduit, is a receiving antenna; the conduit was receiving the AM radio signal. In this example, the metal mounting bracket attached to the conduit's junction box (one antenna) was capacitively conducting the RF signal from the radio station into the module. The module was attached to the SLC control line (another antenna). In essence, the module was conducting signals between antennas.

Conduit can also be used as a shield to prevent unwanted signals from reaching the circuit. It can encase the wires in a grounded metal shield.

When there's EMI/RF interference, though, even using the conduit as a shield takes designing.

BE EXTREEMLY CAREFUL of how the system is shielded. On the Signaling Line Circuit (SLC) for a Notifier fire alarm system, Notifier specifies that the wires ARE NOT SUPPOSED TO BE SHIELDED. This is because of the capacitive lag induced into the SLC when shielded wire is used. The capacitive lag, if shielded wire is used, corrupts the data so the whole fire alarm system becomes useless.

Conduit does not affect capacitive lag very much, so instead of using shielded wire, conduit is OK to use as a shield.

Passive filters use capacitors or inductors. Sometimes the capacitors and inductors are combined, and even resistors can be used. A ferrite bead doesn't look like it, but it is an inductive filter. 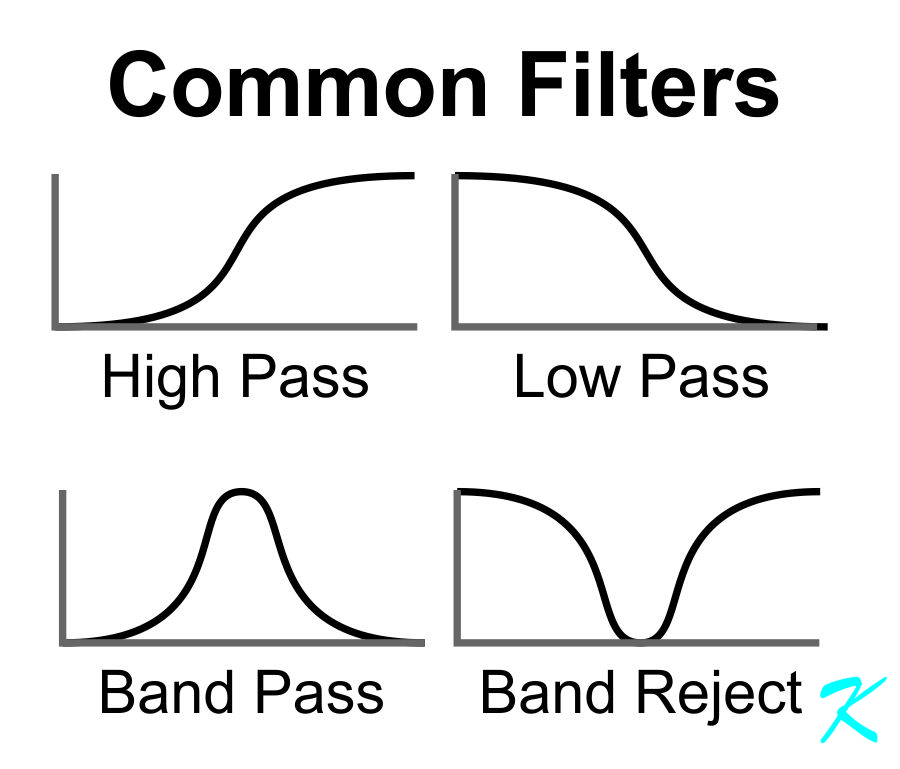 Passive filters are not sharp cut-off filters. They may be rated to:
The effect of the passing and blocking of signals, though, reaches far outside the range shown in the literature. You have to read their data sheets to know what the filters really do.

Unless the passive filters are carefully designed for the specific system, passive filters, like EMI/RF filters, won't always help, and sometimes prevent proper operation of a fire alarm system.