How Does a Booster Power Supply or Signal Power Expander Work? 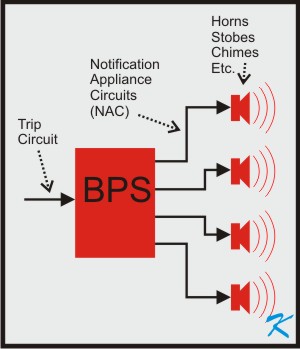 Think of it as a single zone, non-latching fire alarm panel. When a signal turns it on using the trip input, the outputs turn on. When the signal used to trip it on stops, the outputs turn off. It's an extra power source for the Horns, Strobes, Chimes, Etc.

A fire alarm system consists of input devices to detect a fire (automatic detectors and manual pull stations), output devices to notify occupants of a fire (fire horns and strobes), and a control system to turn on the outputs when the inputs detect a fire (Fire Alarm Control Panel or FACP).

Known by many different names from many different manufactures, the Booster Power Supply (BPS) or Signal Power Expander (SPX) provides this extra current.

There can be many BPSs connected to a single FACP. Because the only reason for the BPS is to provide extra electrical current, a greater number of horns and strobes can be used than the FACP could otherwise handle on its own.

Operation of the BPS or SPX

Location of BPSs or SPXs

Rather than congregating them next to the FACP, the BPSs are usually located closer their horns and strobes. This keeps the wires shorter, which is important because, as the current carrying wires get longer, the wires loose more voltage.

The BPSs can be found almost anywhere in a building. They can be located:

To keep the BPS working during a power outage, batteries provide backup power. They keep the BPS standing by and ready for up to 24 or 72 hours under normal power out conditions, and then provide extra power so the BPS can operate the horns and strobes in case of fire, after that.

In some cases, when an output of the BPS is programmed to be always turned on, the BPS can also be used for auxiliary power to operate door holders, control relays, and other circuits and devices.

Troubles on the Booster Power Supply

When the BPS is AC powered, a green LED inside the BPS lights up. When this LED is not lit, the BPS is in trouble.

Under normal conditions, the BPS supervises its outputs the same way the FACP supervises its inputs and outputs. When this supervision detects a short or open in the loop wiring, the BPS goes into trouble. The detection of a ground fault or a problem with the batteries are also common troubles for the BPS. When the BPS detects a problem with these circuits, LEDs turn yellow to indicate the trouble.

When the BPS goes into trouble, it changes the condition of its trouble relay contacts, sending a trouble to the FACP. Also, depending on how it is wired, it also can open the wiring in the trigger loop so the FACP supervision doesn't see its end-of-line resistor. This will provide a trouble to the FACP.

What is a Stair Pressurization Fan (SPF)?
Which Way Does Electricity Flow?
What's the Difference Between Class A and Class B?
What Makes the End of Line Resistor So Important?
What is a Flyback Diode?
What is a Fire Alarm System?
What is an RTU (Roof Top Unit)?
What Causes an Open NAC?
Recent Articles

Can the Fire Alarm System be Fixed so It Can Be Heard?
How Can a Door Holder be Hot and Buzzing?
Why Won't the Added Horns and Strobes Work?
What is the Difference Between a Fire / Smoke Damper and a Fire Damper
How do Pathways Affect Ground Faults?
Why Won't the Panel Show the Detectors?
When Testing, Why Isn't the LED Lit Continuously?
Why Don't All of the Smoke Detectors Act the Same?
Is There a Procedure to Install EST Detectors?
Does it harm the panel if the trouble occurs during a weekend and lasts 2 or 3 days?
The fire alarm bell to my house is going off...
How is an Addressable Elevator Capture Panel Connected to a Conventional Panel?
Why Does Closing Some Gatevalves Show Trouble?
Home Wateflow Switch - Do you know how to reset it?
How is a Pathway Classified?
Just Who Is the Authority Having Jurisdiction (AHJ)?
What are Pull-Up or Pull-Down Resistors?
Do we need horns and strobes in a building shell?
Don't Breathe Smoke
The Pump was Very Hot - What Happened?
What's the Purpose of the Zener Diodes?
How do You Use the Switches for Addressing?
Will a check valve placed before a flow switch help with false flow alarms?
Essential Fire Safety Tips For Landlords
Is it possible the door holder relay is breaking down?
How Do I Connect Two Fire Alarm Panels Together?
Can I connect an addressable smoke detector to a conventional fire alarm control panel?
Learn about fire alarms, one article at a time -