Why Replace Batteries in Pairs? 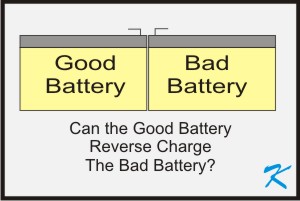 The batteries are there for backing up the system when power drops out. Both batteries have to keep the panel in a standby mode. They both should totally discharge at the same time.

Remember, these batteries are wired in series -- the current going through one of them also goes through the other. If the batteries are not matched, as they are being used up one of them will reach the totally discharged point (0 volts) while the other still has a charge. The one that still has a charge will continue to push current through the totally discharged battery, causing it to reverse charge.

This is not a good thing.

When the batteries are matched, they discharge at the same rate, reaching zero volts at approximately the same time. The current stops so neither battery is reverse charged.