Why is the Voltage on the Notification Appliance Circuit (NAC) so Weird?

In a fire alarm system, the Notification Appliance Circuit (NAC) maintains reverse voltages when checking continuity on the wires, but when the circuit goes into alarm to power the horns and strobes, it changes voltage polarity so it is proper. 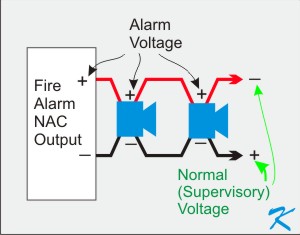 Wires from a Notification Appliance Circuit (NAC) are connected plus to +and minus to -. The trouble is that when measuring the voltage polarity on the wires during non-alarm times, the measured polarity is wrong for the horn or strobe.

Normally, when the Notification Appliance Circuit (NAC) isn't in trouble, the NAC is in one of two states or conditions: Alarm (making noise and flashing, notifying people of a fire) and Normal (silent and not flashing).

When servicing the fire alarm system, it's the difference between the two conditions that cause problems for the technicians. More on the problems later in this article.

To sound the alarm, the fire alarm panel's Notification Appliance Circuit gets people's attention (Notification) using devices like horns, chimes, bells, and strobes (Appliance), and does this by using a an internal relay to apply power over the building's wiring (Circuit).

Then again, under normal circumstances, to supervise the building's wiring, the panel uses a supervision voltage to drive electrical current through the same circuit.

In order to react to this polarity reversal, the horn or strobe has an internal diode, making the device polarity sensitive.

The problem we have for the technician, though, is under normal circumstances, the polarity of the voltage on the wires of the NAC is backward.

Many times, before connecting the wires to the horn or strobe, installers, technicians, and other people who maintain the fire alarm system use their voltmeter to make sure of the polarity on the circuit. If the device is connected so the measured positive wire goes to the + symbol, the horn or strobe will never work.

Panel Trouble on the NAC

Unfortunately, most panels and booster power supplies don't supervise for this problem. They supervise the wire itself, but don't show trouble for a miss-wired device; they let an installer or technician connect the horn or strobe backward.

What's even worse, the supervision power isn't enough to activate the device, so false activation won't indicate anything wrong with the wiring to the installer, either.

The miss-wiring issue will not be discovered until either the next inspection, or when there's a fire and that device doesn't sound. This is, of course, unless the horns and strobes are turned on right then and there to test whether they work.

Then the fire inspector, who should have been shown a fully tested and functioning fire alarm system (and not be required to troubleshoot the system for the installers) also missed their mistake.

Voltage Reversal on the NAC

It's important to remember that the polarity of the voltage, measured while the fire alarm system is normal, is backward; it is supervision voltage -- not alarm voltage.

Only when the system goes into alarm, to turn on the horns, strobes, chimes, and bells, does the voltage change to become forward.